Check Out These Eight Tips for Treating Colds in Dogs

Treating colds in dogs requires the same type of care a human would and so the animal can easily recover as long as they receive proper care. 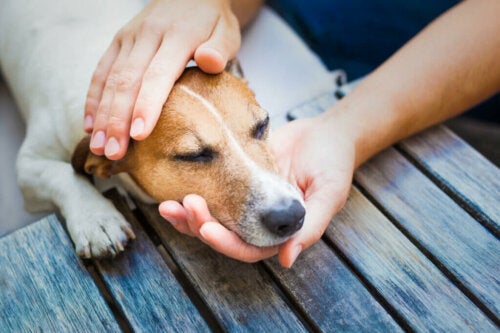 There are many anatomical differences between humans and dogs but colds can afflict this animal as much as it does us, and so treating them promptly is a must.

As you can see, we do share certain behaviors and diseases. In addition, the symptoms of colds in dogs are somewhat similar to the ones for distemper virus or infectious tracheobronchitis — known as kennel cough. However, the causes and treatments of each disease are different. Let’s concentrate on colds in dogs though.

The causes of colds in dogs

Let’s start by saying that sneezing isn’t necessarily a symptom of a cold. There are certain ones that’ll indicate a cold for sure. However, sneezing on its own doesn’t confirm a diagnosis.

Any dog can catch a cold when exposed to strong temperature changes and drafts. This is common when they go out of the house in wintertime and humans don’t realize that they must keep them dry and clean. We also sort of encourage it by not keeping up with their vaccinations.

Symptoms of colds in dogs

The first general symptoms of colds in dogs are:

These signs can last between one and two weeks. In this case, you should ideally take your dog to a veterinarian for a proper check-up. Colds are usually harmless, but other diseases with similar symptoms could be lethal to the animal if not treated in time.

Here’s a list of eight tips to keep in mind if your dog catches a cold:

Preventing colds is better than treating them

Colds in dogs are common but it doesn’t mean this symptomatology is of little importance. A poorly cared-for cold can turn into bronchopneumonia, so you must take it seriously.

Mainly, you must be able to detect the symptoms of a cold early and take them to the vet asap. It’s the responsible thing to do and a great way to show them your love and respect.

Helpful Tips for Preventing Colds in Dogs
Just like humans, animals can algo get colds. In the following article, we'll provide some guidelines to help pet owners to prevent colds in dogs. Read more »