Irritable bowel syndrome in dogs doesn't have a clear cause, as it's believed to be the result of a combination of factors such as diet and the dog's state of mind. 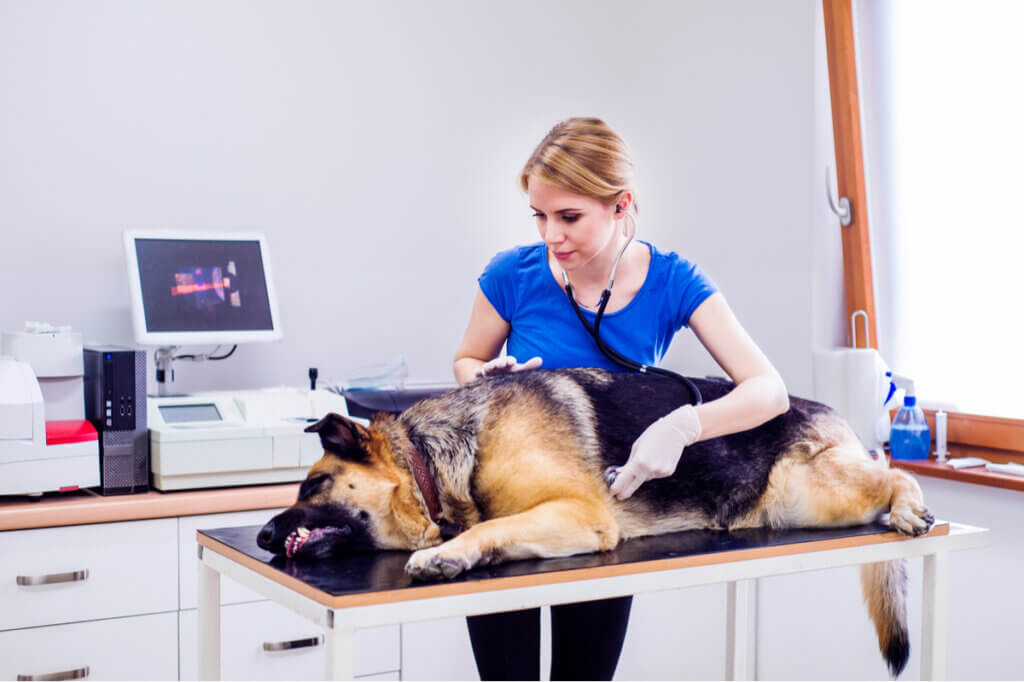 Irritable Bowel Syndrome -IBS- is a pathology that occurs in dogs as well as in humans. It’s a disorder that leads to abdominal pain and changes in bowel movements, among many other things.

In some regions, it’s estimated that the percentage of humans affected by this syndrome is 11.6%. The figure in dogs is similar, since veterinary portals estimate that 10 to 15% of dogs can develop IBS. If you want to know how to detect this disorder as well as how to deal with it, keep reading.

Irritable Bowel Syndrome is a chronic inflammation of the intestinal mucous membranes. The causes of this pathology are mostly unknown. Therefore, we must first rule out other diseases in the dog: Gastroenteritis, colitis, pancreatitis, and parasitic infections, among others.

Once a vet has ruled out all these possible causes, then it’s time to suspect IBS. Although experts are unaware of the exact causes, they believe that it may be due to multiple factors, including the following:

You should note that Irritable Bowel Syndrome in dogs is associated with chronic intestinal inflammation and discomfort. However, it doesn’t usually have to do with any gastric pathology. As in humans, this syndrome doesn’t predispose the patient to develop other diseases.

The most common symptoms of Irritable Bowel Syndrome in dogs are chronic and occasional diarrhea of the large intestine. In addition to this very visible symptom, there are other signs, including the following:

According to veterinary portals, the symptoms will vary according to the area involved. For example, if the stomach is more affected, nausea and vomiting will be more common. On the other hand, if it’s the intestine that’s more affected, then the appearance of diarrheal episodes will be more usual. Even so, both symptoms can occur at the same time.

As we said above, the only possible diagnosis is made by ruling out other possible pathologies that compromise the animal’s gastrointestinal tract.

As far as treatment is concerned, it’s essential to emphasize that it must adapt to the frequency of the symptoms in each case. Many dogs diminish the frequency of their clinical signs with diets rich in fiber, that also must be easily digestible. Your veterinarian will guide you when planning new menus for your pet.

At the same time, diarrhea episodes can be treated with loperamide, a drug that modifies intestinal motility. In cases where the dog’s abdominal pain is detrimental to its quality of life, the administration of antispasmodic drugs, such as clinidium can also be considered.

It’s essential to emphasize that the doses should be exclusively guided by the veterinarian. Medicating a dog without professional assistance can end very badly, since the doses for human use will never match those needed for a dog. If you have any doubts or queries, take your pet to the vet quickly.

Unfortunately, this is a chronic syndrome that can’t be fixed with a pill. Since there’s no clear trigger, the main treatment consists of monitoring what the dog eats and making changes in its diet and routine until an effective combination is found that minimizes its symptoms.

As an owner, you have to be patient and accept that this condition will probably last a lifetime. Of course, this doesn’t mean that you look after your dog any less. Take care of your dog with care and affection, because your dog would do the same for you.

What Should a Dog with Diarrhea Eat?
Diarrhea is a very common sickness that affects many dogs. This could be something more serious than what we imagine, especially if we do not know how to treat it. The animal could run the risk of dehydration, or in the worst of cases, greater damage because of intestinal bacteria. Read more »
Link copied!
Interesting Articles
Illnesses and Treatment
What Are the Symptoms of Fever in Dogs?

Melanoma is the best known and most worrying type of skin cancer in the context of veterinary medicine. There are several types of skin tumors in cats that can affect…