Many of the birds that suffer from psittacine beak and feather disease (PBFD) present very evident signs. However, they die before the first year of the appearance of the symptoms. 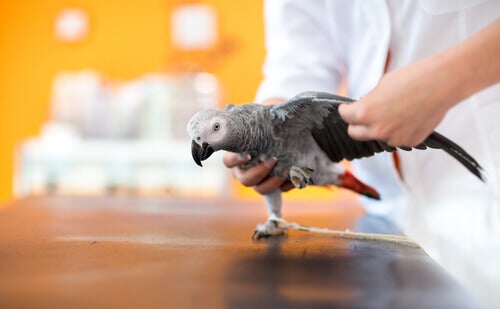 Psittacine beak and feather disease (PBFD) is a condition that affects different species of parrots. It’s caused by a virus that, although rare, can cause major malformations and other significant symptoms, making it one of the most harmful diseases among caged birds.

This is a viral disease caused by a virus known as beak and feather disease virus (BFDV). Experts discovered this etiological agent, representative of circoviruses, after several outbreaks in Australia at the beginning of the 20th century.

Viruses have many routes of infection. In this case, it usually spreads orally. In fact, it’s eliminated through the feces and feathers of infected birds. One of the factors that can trigger the transmission of this virus is the habit that parrots have of grooming each other. However, if the parents are infected, they can transmit the disease to the eggs.

Viruses have many routes of infection. In the case of the beak and feather disease virus (BFDV), it usually spreads orally. Also, it’s eliminated in the feces and feathers of infected birds.

The symptoms of psittacine beak and feather disease (PBFD)

This disease causes excessive beak and nail growth, in addition to feather malformation and loss of feathers. In addition, this condition resembles other pathologies, such as shedding problems in parrots, or even a disorder such as feather-plucking or feather damaging behavior, which is often caused by depression in parrots.

It’s vital to note that, although some parrots that are carriers of psittacine beak and feather disease (PBFD) don’t show symptoms, they can still spread the virus. In fact, this especially occurs in small psittacine birds such as parakeets, cockatiels, and, also, lovebirds. Nevertheless, many infected birds have severe symptoms and die before their first birthday.

As we already mentioned, this disease causes immunosuppression that, along with the malformations, causes wounds that can easily become infected, which is also one of the reasons for its high mortality rate.

If your bird is suffering from these symptoms, it’s advisable to take them to the vet. This way, you can rule out the presence of this disease, which currently has no cure. Since the symptoms are quite nonspecific, the vet won’t be able to diagnose the disease without blood tests.

Regarding prevention, if you buy a new parrot, you need to make sure they get the right blood tests. In addition, you have to place them in a quarantine space before placing them with your other parrots. Also, it’s important to clean and disinfect objects that have been in contact with sick animals or that you aren’t sure about.

In short, this disease is quite rare and, in general, private owners shouldn’t worry about it. However, it’s important for breeding centers or people who own many of these birds and who exchange or buy them regularly to know about it.

Feathers Can Reveal Diseases in Birds
Bird feathers have always been an object of much curiosity for people. What you might not be aware of is feathers can also reveal diseases in their bearers. Read more »