Also called hardpad disease, this virus affects the digestive and respiratory system, as well as the nervous system... Did you know that canine distemper can be lethal? 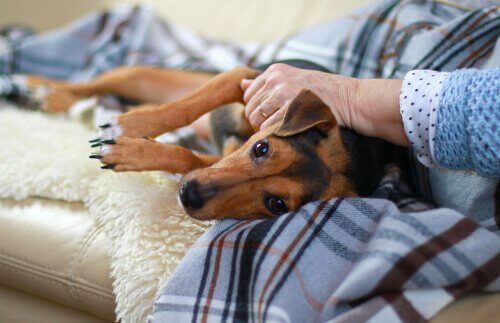 Sometimes referred to as hardpad disease, this is one of the most lethal diseases for dogs. Canine distemper affects both the respiratory and digestive systems of the animal. In more advanced cases, it can also have repercussions for the nervous system. In this article, we’ll tell you about the symptoms of canine distemper, as well as the treatment and causes of this disease.

Canine distemper is caused by a virus that belongs to the family Paramixoviridae. This is the same virus that causes measles in humans. This disease affects domestic dogs, as well as other species such as jackals, foxes, wolves, coyotes, raccoons, and coatis.

Although it cannot be transmitted to humans, it’s very contagious among animals and can be fatal. It mainly affects puppies and older dogs that haven’t gotten the vaccine. Younger dogs are at risk because they don’t have a strong immune system.

Following the vaccination schedule recommended by your vet is the best way to avoid the spread of canine distemper. There is a specific vaccine to prevent the virus, but it isn’t 100% effective.

How do you get the virus?

When an animal infected with distemper coughs, sneezes, or is just present in an area, it leaves particles containing the virus in the air. If a healthy dog passes through the area or breathes in these microorganisms, they become infected.

In addition, if an infected dog eats or drinks water from a container that another dog uses afterward, there is also the possibility for infection. This means that any dog is at risk of distemper. When your dog has been vaccinated, however, the likelihood of developing the disease is much lower.

You should keep in mind that puppies are most vulnerable to infection. Why? Because they haven’t had their vaccines yet. If the mother hasn’t had the vaccine either, then she can’t protect the puppy through her milk.

Young dogs aren’t strong enough to cope with such a strong disease. This is also true of elderly or sick dogs.

Once the virus is in the animal’s body, it incubates for approximately two weeks. After two weeks, you’ll begin to notice symptoms.

When the disease becomes advanced, it compromises the animal’s nervous system. Severe symptoms of canine distemper include spasms, convulsions, and partial or complete paralysis.

You should be aware that most dogs who get distemper die from the disease. The small number that survive have many health and behavioral problems due to the damage caused to their nervous system.

Is there a treatment for the disease?

Unfortunately, scientists haven’t found a complete cure for the virus yet. Once a dog has the disease, giving the vaccine will have no effect.

Before the appearance of the first symptom, it’s essential to take your pet to the vet. They will test for the disease and diagnose it. Treatment is based on alleviating symptoms of canine distemper and preventing them from getting worse, as well as reducing dehydration and preventing new infections.

Antibiotics can be beneficial, as well as vitamin supplements, to help reduce certain symptoms. You need to keep in mind, however, that the disease will run its course. If necessary, your vet may advise euthanasia to prevent further suffering.

The only way to prevent a dog from becoming infected with canine distemper is through vaccination. The appropriate age to receive the vaccination is between six to eight weeks. Then, they should get a booster vaccination each year, and in females when they are pregnant. As they say, prevention is the best form of cure.

Deadly Diseases in Cats and Cogs
These pathologies have symptoms that often aren't specific, which is why it's difficult to detect that your pet is suffering from them. In some cases, they are extremely contagious Read more »
Link copied!
Interesting Articles
Illnesses and Treatment
6 Genetic Diseases in Cats