What Research Says About How Dogs Age

Apathy and aggressive behavior become more common as dogs age because of their fear of being left behind. 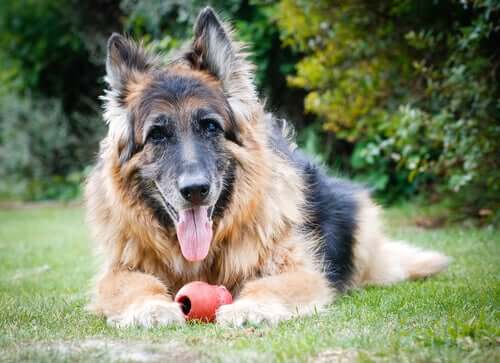 When it comes to how dogs age, we’ve always been told that one human year is basically seven years for dogs. But that rule actually fluctuates a lot. A dog’s breed and size have a major part to play in how it will age. Some breeds also go through physical and behavioral changes that others don’t.

A dog’s life expectancy is about 12 years. That being said, this number can vary a lot depending on anything from physical health, genetics, environment, and nutrition, just to give a few examples.

Most owners have a hard time figuring out exactly when a dog has reached old age (regardless of size). A lot of people say they think their dog is old once it’s about seven or eight. However, most vets will tell you that the better answer is actually five or six. They also say there are some changes in behavior and appearance you can look out for.

Signs to tell you how dogs age

This is very similar to humans, in a way. The appearance of gray hairs is one of the most indicative signs that your dog is getting old. That gray fur tends to be mostly around their nose and eyes.

Changes to their eyes

Dogs tend to lose their eyesight as they get older, which can also lead to cataracts. Other issues include sunken eyes (which often comes from Horner’s Syndrome) and brown spots or other visible changes to the way their eyes looked when they were young and healthy.

Because older dogs tend to be less active, you might assume that they’ll end up gaining weight. The truth is, they actually tend to lose weight in old age. That’s because they also have less of an appetite, which means they eat less, and less frequently.

If your dog has reached the ages we listed above, don’t punish it if it can’t hold in its pee anymore. That’s just another sign of old age. Another potential problem from their reduced appetite is frequent constipation.

Aches and pains, or simply lack of energy may lead your dog to isolate itself. Older dogs that don’t want to be bothered by the other members of their household tend to hide or take longer naps than normal.

That hermit-like behavior tends to come in tandem with violent behavior when your dog is feeling upset about all its health problems. There’s also a definite aspect of fear involved with aging. This can lead to intense responses to minor things, simply because it’s trying to protect itself.

Forgetfulness and other changes to a dog’s mental patterns can lead it to stumble, trip, develop nervous tics, and all kinds of other problems.

Tips on how to help your dog in its old age

Now that you’ve learned a bit about how dogs age, it’s time to face the facts: we all get old, your dog included. But, as an owner, you can do a lot to make its final years better.

On top of taking it in for check-ups at least once a year, you absolutely must make sure it has a healthy diet and gets a good amount of exercise. How dogs age has everything to do with the quality and the quantity of attention they get for the things that change the most as they get older.

Older dogs don’t usually need as much fat and energy from their food because of how much slower their metabolism is.

There are actually lots of dog foods made with this in mind. They also tend to increase the fiber levels in the food to avoid constipation. The transition to a new diet should be gradual, like it would be in any other situation. As you’re transitioning your dog, make sure its ingestion and feces don’t seem unusual.

Although many older dogs tend to isolate themselves, you can still do your part to help them stay motivated. Exercise is a necessity because it will help prevent muscle and bone problems, as well as making sure your dog stays happy and mentally healthy.

So, while not all dogs age in the same way, we hope you’ve got some inspiration on how to spot the signs, and how to care for yours once it’s getting on in years.

Is There Such a Thing as Dog Alzheimer’s?
Older dogs often start to deteriorate mentally. It might seem like all signs point to it, but is there really such a thing as dog Alzheimer's? Read more »
Link copied!
Interesting Articles
Senior
How Does Old Age Affect Your Cat's Behavior?