When we think of blood donations, we usually associate it with human medicine. however, this also exists in veterinary medicine. In this article, we'll talk about blood donation campaigns for pets. 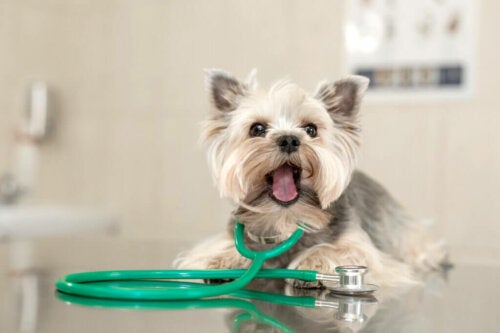 There has been growing interest in transfusions for veterinary medicine recently, and, as a result, many countries around the world have created blood banks for animal blood donation. This has also led to increasing development in the area of treating critically ill animals with donated blood.

Since all blood must come from healthy pets, the need to find new donors is always pressing. That’s why it’s so important to inform owners about their options for helping.

Transfusions in veterinary medicine throughout history

The use of blood transfusions in animals isn’t exactly new. It’s been going on for a long time and, in fact, one could consider it to be the origin of transfusions in human medicine.

In 1665, Richard Lower, an English physician, carried out a transfusion between two dogs. From then on, there were more experiments like this. In fact, it was only a matter of time before there were similar experiments in humans.

Initially, blood transfusions were drawn directly from the donor using an anticoagulant. Then, the blood was administered to the recipient a few hours after the donation.

However, given an increase in demand and limited supply, we’re working to make better use of this resource. This is why there’s a tendency to administer only the necessary blood components. For example, now we can administer only the red blood cells or plasma.

Similarly to humans, not all animals are valid candidates for blood donation. Here are some of the considerations to take into account before recommending your pet as a donor.

Canine donors need to meet certain characteristics, such as:

It’s best to use dogs that are able to stay still on their own during the extraction procedure. However, if necessary, you can use light sedation, although this could have adverse consequences.

Any dog that has previously received a transfusion may have developed antibodies against different blood types than their own. Therefore, animals that have received transfusions aren’t suitable donors.

Tests prior to donating blood

Some infectious diseases have the potential to be transmitted via blood transfusion. These can be from serious infections, such as leishmaniasis or brucellosis. Therefore, ensuring the absence of these microorganisms in potential donors is important.

Also, in countries like the United Kingdom, dogs that have traveled abroad are excluded as donors. This greatly reduces the need for extensive testing for infectious diseases.

The requirements for cats are very similar to those of dogs, with some differences inherent to the species. For example, concerning weight, it’s enough that the cat is heavier than 9 pounds.

In addition to the importance of the blood type, there’s also concern about possible infections. For example, a donation center will conduct tests to rule out feline leukemia or cat immunodeficiency, among other things.

Given the need to sedate donors and the strict requirements about disease prevention, it’s difficult to create a large pool of feline donors.

The most significant veterinary centers may consider housing a group of disease-free donor cats. Then, after a while, these cats are relocated as pets.

Animal blood donation: Did you think this was just for humans?

Experts say that there’s a widespread lack of awareness regarding animal blood donation. Alternatively, it could be a lack of access to information, which is possible, but this seems difficult in the age of the internet.

Any voluntary donation plans are based on the altruism of the pet owner. However, it’s true that the dog is usually rewarded with food, trinkets, or toys.

However, it’s important to spread the word about animal blood donation because you might never know when your faithful companion may be the one who needs help from another animal.

Obsessive compulsive disorder (OCD) is a pathology derived from anxiety and characterized by intrusive, recurrent, and persistent thoughts that produce…

Illnesses and Treatment
Wobbly Hedgehog Syndrome: What Is It?

In the past, it was rare for people to have any sort of pet besides dogs, cats, or an occasional…

Illnesses and Treatment
The Most Common Causes of Pneumonia in Pets

Many readers may have gone to the veterinarian recently because their pet was experiencing respiratory problems. In general, most of…

Profesional Advice
What to Do if Your Dog Ingests Poison

Illnesses and Treatment
The Causes of Convulsions in Dogs

Many people cringe by the mere thought of having to go through a hospitalization process with their pets. Generally, people…

Interesting Articles
Invertebrates
How to Overcome the Fear of Spiders

Arachnids are fascinating creatures and come in all sorts of shapes and sizes. Their impressive hunting habits and behavior continue…

Animals
The Prevention and Early Detection of Colic in Horses

Colic in horses is a very frequent problem and is one of the main causes of death. This is especially…