A Dog’s Friendship with a Duck Cures His Depression 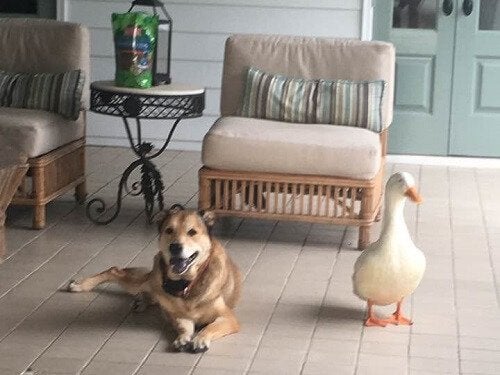 A video telling the story of a remarkable friendship between a duck and a dog has been gong viral on the internet.  It might seem strange for two very different species to become friends, but there’s a touching story behind this special friendship.

Friends can make you laugh and cry, but they also have the ability to comfort you and cheer you up when you are sad or depressed. That’s exactly what happened in this story!

George and Blake, an unconditional friendship

George and Blake were two dogs that lived under the same roof.  They were more than just housemates, they were friends, almost like brothers. They went everywhere together, and spent the entire day playing, fighting, and laughing together. The two became inseparable. Their owner event thought that if she adopted another dog, they wouldn’t get along.

But animals often surprise us, and that was how it was like with these two dogs. However, one day George’s life took a tragic turn.
Blake got sick and no longer had the energy to continue playing with George. One day, he passed away. George became discouraged. He had no appetite, was always sad, and would stare blankly into space. He soon plunged into a deep depression that seemed as if he would never recover.
According to his owner, they tried everything to cheer him up. They took him to the vet, played with him, walked him more than usual, but it wasn’t enough for George.  He was missing something–Blake.

Friendship between a dog and a duck

Just when there seemed to be no remedy for George, a surprise appeared in his garden: a wild duck. No one knows where the animal came from, much less the reason why he began to follow George everywhere since that day.

At first George was uninterested with his new friend, and you could even say he didn’t like being around him. However, this was not an obstacle for the duck, who was named Donald. Donald followed George everywhere and tried to grab his attention by playing games with him or by bothering him with his beak.

And he was successful, because George began to follow him. We don’t know whether it was out of curiosity, or anger, or because the duck had awakened his desire to play. This animal got the dog to go outside out of his own free will for the first time in a long time.

This friendship between a duck and a dog went above and beyond. The duck showed he had no intention of going back to wherever he came from. Therefore, George’s interest in the duck and Donald’s perseverance resulted into their friendship.

They don’t leave each other for a second, and they go everywhere together. They have become new playmates and even sleep in the same bed!

This has helped George recover from of his depression. He is now more energetic, and wants to go out more often, he even enjoys running in the mountains. He no longer cries or seems to regret the death of his friend Blake. We don’t know why the duck decided to do what he did–perhaps he had a sixth sense that made him notice that George was going through a hard time.

No one knows, but it’s another example of how animals surprising us! And without a doubt, we should admire and imitate the empathy they always show.

We like to think that Donald had friends and family in the last place he lived at. But one day he saw George, noticed he was going through a hard time, and was willing to sacrifice everything to be with him and help him feel better.

Who ever said that animals don’t have feelings? This story proves that they do.