A Mummified Wolf Cub Was Discovered in Canada

This wolf was found next to a mummified reindeer. They were found near a volcanic layer of rock that's around 80,000 years old. The Yukon region in Canada is famous for its gold mines. However, that’s not the only underground treasure that can be found in that part of the world. Recently, a perfectly preserved, mummified wolf cub was found in the area. Also, a few feet away from that finding, there was also a mummified reindeer.

Some miners that were digging for gold found the two mummified animals in 2016. Scientists have been working endlessly and running a wide range of tests on them for two years.

Now you can now see the mummified animals on display at the Dänojà Zho Cultural Centre, in Dawson, Canada.

Although nowadays the main feature of the Yukon region are its dense forests, this wasn’t the case a long time ago. During the ice age, this region was frozen, dry, and inhospitable. Several animals like reindeer, wolves, bears, and even woolly mammoths and saber-toothed tigers lived there.

There are lots of mining companies detonating the ground in search of gold near Dawson, but gold isn’t the only treasure to be found. Over the years, it has become clear that the region is also a gigantic prehistoric fossil cemetery.

Mining teams are constantly finding massive bones of megafauna. In fact, it didn’t actually surprise the miners that much when they found the mummified wolf cub and caribou.

Whenever they find fossils, they know they have to report the findings to the experts: paleontologists. First, the miners found the reindeer. A few weeks later, the very same team made another discovery. Just a few feet away, they then found the mummified wolf cub. Both of these findings still had their skin, muscles, and fur intact. 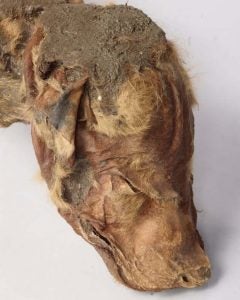 The wolf cub is in a near perfect state of preservation. You can still see some details of its head, tail, and paws, and its head and fur are perfectly preserved. As far as the reindeer, only the torso, two front paws, and head were found.

One of the paleontologists, Grant Zazula, talked a bit about the findings: “to our knowledge, this is the only mummified ice age wolf ever found in the world.”

The scientists researching these specimens are extremely excited about the surprising discovery. Paleontologists mostly have to work with fossilized bones, so having real skin and fur is really amazing.

The scientific team’s main interest right now is to do DNA testing. That way they can figure out where this cub fits in with its wolf descendants. They also did a radiocarbon dating procedure by extracting small bits of skin from both animals.

The tests provided some surprising results: both fossils were around 50,000 years old, which is far back as radiocarbon dating can go. The reindeer was found in a layer of volcanic rock that’s roughly 80,000 years old. Some of the experts see this as the most accurate indication of how old the wolf and caribou fossils really are.

Dr. Zuzula said that there was still much research left to do with the two animals. For example, by looking at the carbon and nitrogen in their skin and fur, they might be able to figure out what these animals ate.

He also said that it was strange to have found these mummified animals in the first place. Obviously, there are still wolves and reindeer existing today, but there weren’t many of them in the ice age. Small animals usually couldn’t survive the cold temperatures.

The fact that they survived is a mystery to the researchers, but they’re hoping the DNA tests will solve it. The results could help construct a model of their genealogy. Doing that would help them get a better idea of how prehistoric wolves evolved into the ones walk on the earth today.

“Ice age wolf bones are relatively common in the Yukon, but having an animal preserved with skin and fur is just exceptional — it just makes you want to reach out and pet it. It’s an evocative glimpse into the ice age world,” said paleontologist Elsa Panciroli.

The importance of these fossils

For the Tr’ondëk Hwëch’in people (the natives of the area), this is more than just an archaeological discovery. Both animals are symbolic of the region itself. People in the Yukon have gotten food and clothing from reindeer for many years.

As for wolves, they helped maintain balance in nature. Together, the two animals are a symbol of harmony. Having found them both is like a sign of being connected to nature, even thousands of years later.