The marketing technique is finally categorized as 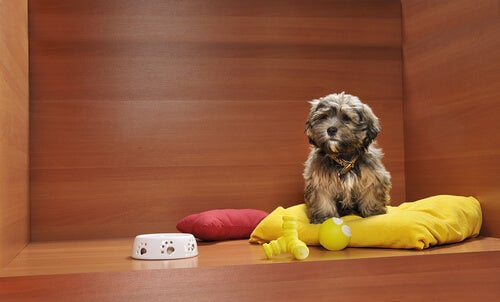 Surely when you were a child and passed by pet stores, you loved to stop and look at the puppies displayed in the windows. They were usually purebred and looked almost perfect. They nearly belonged in a calendar. However, when you got older, you started to rethink it. Perhaps, you realized how sad life is for these puppies in the pet store windows.

For example, they sit in a small glass box. There, they even have to do their business. Let’s be realistic. Surely, the employees clean the boxes. But, sometimes they don’t have time to do it right away. So, the animal could be there with his feces and urine for a while.

It’s not only that. But, usually, they share the space with one or two more dogs of the same breed. The quality of life is worse and there is less oxygen. All this without even recounting the horrible journey that they must make from the breeding center. That means where they were born. And then, they finally arrive to the pet store window. Not much of a destination, after all. Without a doubt, it’s a cruel business. In fact, it promotes abuse.

Well, today we have good news for everyone that loves animals. The display of dogs in store windows has been banned. Do you want to know the details? Read on below.

After many years of democracy in Spain, we’ve seen changes in pet ownership laws. Finally, we have excellent news. Animals for sale will no longer be permitted in pet store windows.

The new rule only applies to dogs and cats at the moment. But, we are certain that it will apply to other animals. For example, maybe fish, spiders, snakes, birds, and more, soon.

For now, we will settle for this piece of good news. After all, it has many additional benefits for animals. For example, any store or business that does not follow the rule will receive a fine of up to 200,000 euros. So, surely the owners of animal stores will not want to display their pets in their store windows anymore.

In addition, they will harshly punish those that abandon or mistreat an animal. For instance, they will receive fines from 100 up to 200,000 euros.

Sure, it’s a good law that will be set in place shortly. However, animal lovers will want more.  They will seek that the sale of animals be banned, too. Basically, they argue that it leads to cruel treatment of the animals. Why?

Why people shop at pet stores

We desire the beautiful puppies that we see in the stores. After all, they look like they’re from a magazine. So, we look for them like a needle in a haystack. However, they have a difficult past behind them. They were born in breeding centers. At these centers, the female dogs are only there to give birth again and again, and when their bodies can no longer tolerate more births, the breeders sacrifice them.

Furthermore, they also sacrifice the puppies that are not “perfect”. They only select the ones that look worthy of a photography shoot.

The “selected ones” are put in boxes with other dogs, whether they be the same breed or not, and they fill the box until it’s full. They are placed in a truck that takes them thousands of kilometers away without water or food and in unhealthy conditions. In fact, only half of them survive. When they arrive at their destination, they are put in a glass trunk yet again.

How we fight for longterm change

While we continue to buy animals, displayed in windows or not, this cruel treatment will keep happening. So we recommend, “don’t buy, adopt.” Like we already told you in another article, animals that are sold in stores have many psychological, emotional, and even physical problems.

In order to have a healthy and loving dog, and to do your bit in the fight against animal cruelty, adopt!

If everyone does it, then maybe we can stop cruelty towards animals. We could also stop abandonment, or at least end up adopting all those puppies that don’t have a home.

Zoology is the science that studies animals, so its scope of investigation is very wide. Moreover, it incorporates branches specialized…