Why It's Better to Adopt Two Cats Instead of One 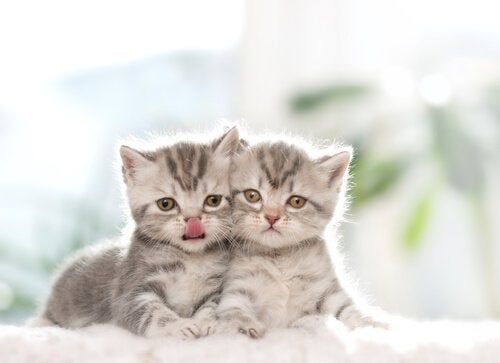 If you like kittens and you have decided to adopt one into your family, then seriously take this proposal into consideration: if you are in good financial situation then it is better to adopt two cats. Let us tell you why.

Two kittens: Same amount of work but twice the happiness and affection

It is ideal to adopt a pair of kittens from the same litter in order for them to grow up together. However, if you already have a cat and want to adopt another meowing friend into the family, then do so while taking some precautions.

Two cats will be about the same amount of work as one, but twice the satisfaction. You’ll soon see why.

Although, the most important thing is that cats- – are very sociable animals even though some deny it- – will grow up happier and will have much better personalities and behaviors.

When it comes to cats, it’s best to adopt two instead of one, as long as your budget allows you it. You will not regret it: they will grow up healthier and happier, and have much better personalities and behaviors.  Also, fun will be guaranteed in your home.

Among the advantages of adopting two cats instead of one, we can highlight:

Other topics to consider if you decide to adopt more than one cat:

Since nothing is perfect, you have to consider other issues that come with having two cats. For example, it doubles the expense for food, veterinary, vaccines, toys, litter, etc.

However, it also doubles the love, companionship and… fun. Playing with cats or just watching them play is priceless.

For that reason, the balance is in your favor.  If there it is in your budget, take a leap and decide to have two cats instead of one: they will be able to develop their cat personalities better, and live healthier and happier.
Link copied!
Interesting Articles
Cats
Studies Reveal that Cats Have Different Personalities