Lilo, the Husky Who Adopted a Cat 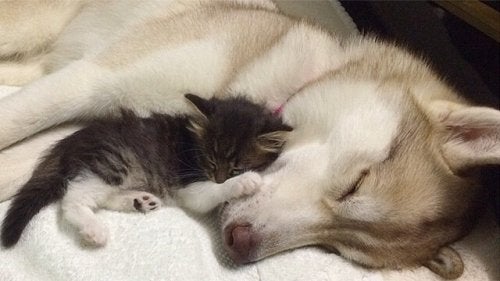 We’ve told you a lot of wonderful stories about the unconditional friendship of animals — no matter the color, breed, or even species. Today we bring you a beautiful story about a Husky named Lilo and her unconditional love for a kitten.

Lilo lived with her owners and siblings. She was spayed, so she could never have puppies. She didn’t expect that life would bring her an adoptive daughter: Rosie.

Rosie is a kitten that someone left to die at birth. She was homeless, hungry, and thirsty, but someone decided to rescue her and take her home: Lilo’s owners. When they picked her up she was almost dead. She could barely open her eyes and she was very weak.

When she got home and saw Lilo and two other Huskies, Rosie was very frightened and nervous. Maybe she felt overwhelmed by everyone looking at her, including Lilo’s owners, now Rosie’s new parents.

So they decided to leave Rosie and Lilo alone in a room without anyone watching them — no audience, no pressure, just the two of them. Well, it was an excellent idea, because soon Lilo started acting like a mother. Her maternal instinct woke up and she adopted Rosie as if she were her own puppy.

Dogs can actually undergo “psychological pregnancies.” Interestingly, they may even have the same symptoms that they would have if they were really pregnant, like producing milk. And it happened here! It seems that Lilo’s strong desire to be a mom enabled her to nurse little Rosie.

Breast milk is undoubtedly the best food for baby animals in existence. Rosie’s case proved this, as she quickly recovered and opened her eyes, walked correctly and even ran, jumped and played.

Today, now fully recovered, Rosie is considered part of the family and lives happily with her “mom” and her uncles. We don’t know whether she thinks she is a Husky or if she knows she is a cat, but what we do know is that the sympathy and humanity of her owners and her generous mom Lilo saved Rosie’s life.

Isn’t that a touching story? We loved it too!

Other stories of unconditional love

This is not the only story out there about unconditional friendship — far from it — so we’d like to take the opportunity to remind you of a few others:

These are just a few of the many stories we could share with you of loyalty and friendship without prejudice. After all, true friendship knows no color, race or species.

Like most exotic animals, the maintenance costs of pet monkeys are quite high. But there are many other reasons why it’s not a good idea to have one in captivity. Continue reading to find out more about it. Pet monkeys… 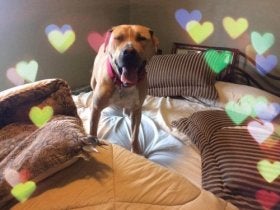