Couple Rejects Their Own Abandoned Dog

Not every dog can go home again. Find out how you can help. 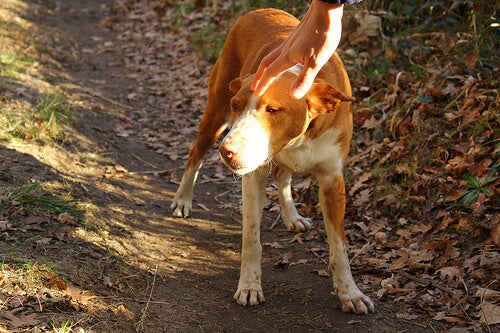 There are many who say that animals are better than people. Sometimes we have to think that this is true. Although when we hear “abandoned dog” we always think about returning a dog from the street. However, the story that we are going to tell you today teaches us another harsh reality.

To think that someone could abandon the same animal twice sounds despicable, cruel, and extremely sad. Although unfortunately, that is something that happens. Just look at the following story.

A visit to the animal shelter

It was a day like any other when a couple arrived at an animal shelter to adopt a puppy. As was the protocol, the workers attended to them nicely and showed them all of the animals that were in the shelter.

The couple walked around, looking at the animals and petting those that seemed the most adorable to them. Everything indicated that they believed they had arrived at the perfect place to find what they were looking for. However, something would soon happen that would leave everyone there in shock.

One of the dogs went towards them as if he knew them his entire life. He started crying, howling, and running around in circles, crazy with happiness. He seemed to have found a lost treasure! And he wasn’t very off because it was also how he felt, like having found something lost.

Seeing the dog’s reaction, the volunteers, who were still amazed, recommended that the couple take the dog. They seemed to have a special connection. The couple denied, something that the shelter workers couldn’t understand.

So, seeing themselves under pressure, the couple had to explain the truth. The dog had been theirs, but they abandoned him when he became old and sick. Even though the animal had recovered, the couple didn’t want to take responsibility, and they demanded to adopt another dog.

Obviously, the shelter denied their request. And not only that, but they made sure that the couple cannot adopt another dog in nearby areas. They even filed a report against them.

All of this was done some time after the shelter workers investigated the dog’s situation when they had found him. He was on the verge of dying due to dehydration and starvation.

Today he is a healthy and happy dog that can be adopted by anyone that is willing to love him. It is incredible to think that when seeing the the dog’s feelings towards them, the couples’ hearts continued to be so cold that they left him there alone again. If you have ever wondered if a dog can be abandoned twice, the answer is yes.

We don’t know what this abandoned dog would feel after seeing that his former owners rejected him again. What we are indeed sure of is that he is cared for very well, and soon he will find a home that loves him and gives him the treatment he deserves.

They say that life hands you back what you give, and maybe that couple has thought precisely about that phrase. Who could have told them that they would choose the exact animal shelter where their abandoned dog was? And after telling their story, how did they think they would be allowed to get another pet? Such nerve!

If you want to put in your two cents for the fight against abandonment, don’t be blind and deaf to whatever type of abuse you see. If you see an abandoned dog, contact an animal shelter that can go pick him up and take care of him so that he recovers.

And of course, before adopting, think long and hard about the responsibility that comes with it.