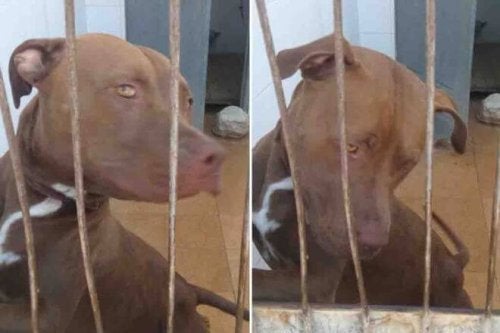 Despite repeated warnings, irresponsible owners continue to leave their pets locked in their cars, putting them at risk of heat stroke and death. This time the news takes us to the municipality of Aspe in Alicante, Spain. There, the Civil Guard was able to save a female pit bull. The rescued dog was transferred to a shelter, where she is recovering.

Members of the Civil Guard were called to a neighborhood by an anonymous caller reporting the illegal occupation of a house, which they were not able to verify. Instead they discovered a pit bull locked inside a car without any ventilation, parked in direct sunlight.

The agents immediately tried to call the owner of the vehicle, a 29-year-old Bulgarian woman, but they were unable to locate her. They then called her through the police megaphones in case she was in the vicinity, but there was no answer.

As time passed and the dog began to show signs of being in grave danger, civilians decided to break one of the windows and remove the animal from the car. They then gave the dog water and found out that she was female and had no microchip ID.

The rescued dog was given to members of the Society for the Protection of Animals of Medio Vinalopó. It is located in the city of Elda and they were summoned to the site by the Civil Guard.

The shelter reported that the animal was properly examined and is doing well after recovering from dehydration after having been in the locked car parked in direct sunlight in Alicante.

As for the presumed owner of the animal, she has not been located. She could be charged with animal abuse. Her vehicle was removed from the site by agents of the local police of Aspe. It was then deposited in municipal facilities of the city Council. So far it has not been not claimed.

Updates on the case of the rescued dog in Aspe

Although many good-hearted people expressed their desire to adopt the pit bull, they are waiting a court decision. If after the investigation they decide not to return the dog to her alleged owner, or if the owner never shows up,  the city council will declare the dog abandoned. After that, it could be given up for adoption.

But if they ever find the woman, she will have to explain why she left the pet. Since potentially dangerous breeds must have ID in Spain, she also must explain her lack of a microchip.

However, all proceedings take time. Meanwhile, the dog continues to recover from the terrible experience she went through because of irresponsible humans.

Never leave a dog in a locked car

Latest News
What Is Agroecology Farming?

Without a doubt, current agricultural systems have provided food to billions of people on Earth. However, these farming methods have caused some of the worst damage to the planet through…