Loyal Dog Tries to Revive His Friend After Accident

This tragic true story shows just how caring and thoughtful dogs can be—even more so than humans! 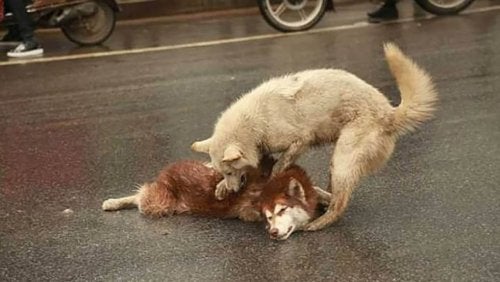 Not long ago, a video was circulating on the Internet. It showed a woman who was run over and nobody came to her aid. Not only that, but she was run over a second time as she lay on the ground. This video outraged many who had to rethink what people are made of. Luckily, animals do not seem to be like this. We can see this in this video of a loyal dog that tries to revive his buddy.

There are many who say that animals are better than people. The truth is that, as we see these events, everything seems to confirm this theory.

The opposite of what happened with this woman in China. A dog showed absolute loyalty to a companion after it was run over. And the curious thing about this story is that it also happened in China.

The dog that tried to revive his friend

Apparently, these dogs were friends because they were walking together. You could even say that they seemed to be talking to each other.

It was a day like any other, and they just wandered the streets looking for something to eat and enjoying the fresh air around them. However, when crossing the street, everything changed in an instant. An unfortunate instant for both of them, although one came out more hurt than the other.

While both were crossing a road together, one of the animals had the bad luck to be run over. Meanwhile, the other was unharmed. However, the latter was not willing to abandon his friend. Even at the risk of his own life, he did something no one expected.

He went back down the busy road, putting his life in danger since he could suffer the same fate as his companion, and tried to revive his friend. He stayed with him and nudged him with his head, hoping that he would wake up.

The animal does everything possible to try to wake him up: he pushes him, licks him, barks at him, sniffs him and even pushes him with his legs. And although he seems to be unsuccessful, his effort and enthusiasm does not wane. In the end, when he seems to realize that there is nothing he can do, the animal cries unconsolably, as we can see slight convulsions in his stomach.

It is a sad story but one that teaches us a lot that we can learn from animals: their unconditional loyalty and, oddly enough, their “humanity.” We know that it is a term associated with humans, but it goes beyond that.

The term humanity refers to a series of feelings that must come from our hearts to help others, even when it puts us at risk. Is that not what was demonstrated by this puppy that wanted to revive his friend?

We will let you watch the video to judge for yourself:

A true friend loves at all times and a brother is born for when there is anguish.

There are many stories of loyalty that we have told you about our animal friends. No one can deny the good feelings these give us.

For example, we told you about the story of two puppies who walked together until they made it to a place to eat. The dog was blind, and her brother was with her at every moment defending her and saving her from danger. Who says that animals have no family ties? Way more than that!

What is clear with stories like today’s and some others that we have told you over the years that you have been reading our blog, is that we should learn a lot from animals.

Learn to have a heart without envy or resentment, without hatred and with empathy, giving a hand to those who need it. Don’t you think the world would be a better place if we were all more like animals?

Source of the image: elpais.com