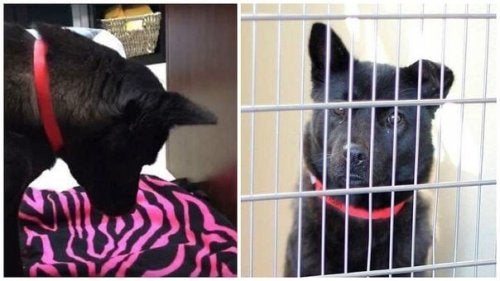 Harriet is the name her new owner gave her after she adopted her. The place where she had lived before would have been hell for any animal. Soon after adopting her, her new friend realized that not only did Harriet sleep standing up, but she didn’t even know how to cuddle — all a result of the abuse.

Harriet came from a Korean company that sold dogs to restaurants in the city. In its stores, there were cages with 200 dogs inside. The animals lived there, all crammed together, waiting for their tragic end in the kitchen. The Humane Society of Tampa Bay rescued them from their terrible conditions and mistreatment and put them up for adoption.

Harriet’s life has changed completely. Now she lives in Florida with her new owner. It won’t take a long time for Harriet to overcome the trauma of her three years of life.

Experts who’ve commented on the case claim that Harriet will soon be able to go back to sleeping lying down and forget her abuse. In fact, through the love her new owner is giving her, she’ll be happy.

Outdoor and indoor dogs vary in their sleeping positions. Dogs choose to sleep in different positions that allow them to do things like conserve body heat and be ready to jump quickly to action.

Sleeping on their sides

Dogs love to sleep on their sides. For them, it’s a restful, relaxed position. When a dog sleeps on his side, what it means is that he’s very comfortable with his environment and feels secure.

The curled-up position is the most common for dogs, with their legs hidden under the body and with their tail wrapping around to touch their faces. In this position, a dog is naturally conserving his body heat and protecting his extremities, face, throat and vital organs. If your dog tends to sleep in this position, it means he’s docile, easy to train, and has a good disposition.

Sleeping on their belly

Dogs that sleep “belly down” may not be very relaxed. Their muscles are too tense for them to let themselves drift into the REM sleep phase. When you see them in this position, it tells you that they’re not relaxed. But that doesn’t have to be a bad thing. In fact, they may even be the most energetic and adventurous dogs, always ready for action and fun.

Sleeping with your dog

A dog must have his own bed. In addition to being risky to your health, if your dog sleeps with you, he’ll get much more dependent. This could cause serious separation anxiety. It could get so serious that the dog could fall into depression, lose his appetite or start being destructive.

Another risk of your dog sleeping with you is the habit of “marking his territory.” It’s a very hard habit to break in a pet. While you of course don’t want your dog to urinate on your bed, they don’t understand human norms. To him, all he’s doing is simply marking the place where he sleeps.

There are many reasons it’s not hygienic for a dog and his owner to sleep in the same bed. The first is that there are invisible microorganisms that live in the dog’s fur, on his skin and on his feet. Some of these viruses and bacteria are harmless, while others, like ringworm, can multiply quickly and cause infection. They may not affect your dog but may harm us humans.

Source of the main image: diariocorreo.pe