Attention! Never force your dog to walk on its hind legs

Attention! Never force your dog to walk on its hind legs 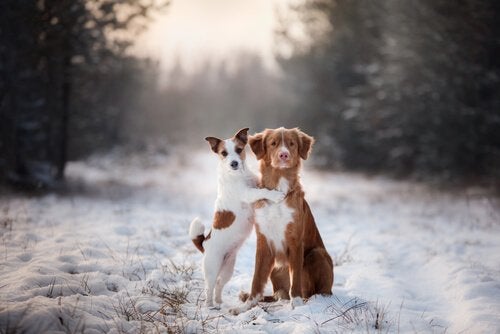 A cute Poodle was filmed while walking on her hind legs. Then, half of the planet exploded with emotion through its digital devices. The dog seemed to be able to walk on her hind legs with ease, naturalness and without help. But the possible damage to her anatomy is incalculable.

Worse still are the hours of torture and abusive training that some of these social media-famous dogs endure to entertain us. What most people ignore is that behind these viral videos, there is a story of terror, pain and suffering.

Forcing a dog to walk on its hind legs can lead to serious health problems. Not to mention that this practice could be considered as an act of animal abuse. This brings us to the controversial Dou Dou viral video. Dou Dou is the famous dog from Shanghai that is going viral on social media.

Dou Dou: the dog that walks like you, on her hind legs

A video went viral whose protagonist was a brown-haired Poodle dog. The dog’s ability to run and jump the same way that humans do, on her two hind legs, amazed thousands of people.

The less conscientious Internet users enjoyed the video and, fascinated with what the dog could do, shared it. Soon, another group of people began to publish videos about the denigrating treatment that these canines receive, from owners that have the intention of forcing their dogs to learn this type of “trick“.

The controversy soon came to light. Dou Dou was possibly a dog that was being exploited by a trainer.

In almost all the photos, the poodle appears standing upright and dressed in different dresses, as if she were a human girl. What terrifies the animal rights activists is that people try to train their canines in order to monopolize attention on social media.

It did not take long for Peta, an animal rights and protection organization, to take a position on the matter: “Animals are not here for our entertainment, period.” With this and other messages, activists invite us to think twice before pressing the “like” or “retweet” button.

This seems to be the effect of a culture that aims to humanize domestic animals in an exaggerated or unhealthy way.

Dogs usually walk and run on all four limbs. More specifically, a dog’s hind legs are only designed to support about 60% of the dog’s total weight.

Humans evolved to support 100% of their body weight using their strong leg muscles, unlike dogs. When dogs learn to walk on two legs, they force their muscles and bones to endure excessive weight in an unnatural and uncomfortable position.

Some dogs are able to raise their front legs but this is a quick movement, unlike walking upright. Owners who train dogs to walk like people achieve this through physical violence and promoting fear in the animal.

There are many veterinary experts who believe that this practice can generate considerable problems in the dog’s spine and knees. This is according to the characteristics of each dog breed.

A few days ago, the owner of Dou Dou released some statements about the video. His name is Wen. According to him, his dog has walked upright since she was a few months old. The owner believes that his pet suffers from a strange congenital condition that allows her to walk on her hind legs without issues.

However, it is known that there are trainers who prepare domesticated dogs to perform this unnatural walk. In addition, in some of the videos it seems that Wen is giving orders to his dog, which is suspicious to the video’s critics.

We do know that humanizing animals in an exaggerated way can lead to animal cruelty. It is one thing to feel the same love for a dog as for a family member. It’s something very different to make your pet act like a person, which might bring up questions of animal cruelty.

Our responsibility as animal lovers is to inform ourselves before supporting any kind of animal “circus” act.