These cetaceans may seem that they're happy because they do pirouettes and play games (by force) in the water of the dolphinariums. However,  the truth is that these animals are deprived of their freedoms in exchange for money. 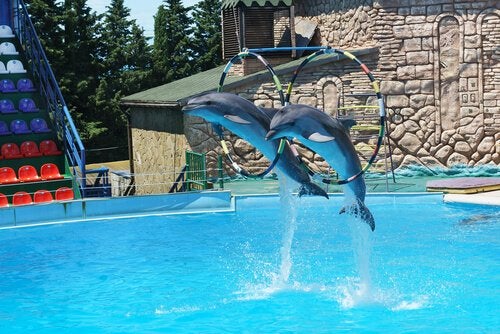 Dolphinariums are intended to get a closer look at dolphins, an incredible animal that everyone loves. They are wonderful to look at and they seem to always have a smile on their face. But… have you ever stopped to think about the amount of space they have? Have noticed that they’re out of their natural habitat, trapped?

Origin of the dolphinariums

A dolphinarium is a set of tanks that try to imitate the natural habitat of dolphins and orcas. They also enable people to get a closer look at these magnificent cetaceans. They are open to the public, and there is an entrance fee if you want to watch these animals participate in shows, performances and you can even swim with them.

Also, they promote their reproduction and breeding, so they’re sometimes used for scientific research. These facilities are normally placed inside of zoos, amusement parks or aquariums.

The first dolphinarium — if you can call it that — opened in New York in 1861. There were actually two belugas that were kept in captivity so that people could see them.

In reality, the first commercial aquarium that showcased these animals was in 1938, when they became popular. The biggest peak was at the time of the movie Flipper, which is a movie about a dolphin. It’s amazing how much movies can influence people’s lives!

Where do dolphins and killer whales come from?

Obviously, these animals don’t show up to these places on their own. They’re captured from their natural habitat so they can be shown off for money. Dolphinariums are never run by non-profit organizations. It’s  actually the opposite because they make a lot of profits.

So, a great controversy began in the 60s and 70s. Authorities claimed that these places are uprooting these animals from their natural habitat for a single selfish purpose- money.

Even so, they’re all over the world. They’re widespread in some countries such as Japan and the United States. They aren’t as common in others, like Spain, where there’s an increasing awareness of animal cruelity.

Dolphinariums offer different shows and performances. At some, you can even swim with them, a dream that many people have. Many people want to see these friendly animals up close and personal.

There is also another number of dolphins and orca in dolphinariums that are a result of captive breeding. These animals are denied the opportunity to develop in their natural habitat. That’s how they spend their entire lives, away from their pods and curbing their instincts.

For example, dolphins need to swim hundreds of kilometers every day, which is something they can’t do in artificial pools. They were all created to live in wild, so who are we to stop that?

Where to see dolphins without supporting dolphinariums

Dolphins are amazing animals that should be enjoyed in their purest natural environment: in the ocean. There are many beaches and coastlines where they live and you can visit to take a dip with them.

There are professionals in those areas who organize excursions so you can see them in the distance, or you can even swim with them in the open waters. Dolphins seem to have a special connection with humans, and they won’t leave when someone gets close to them. Just the opposite!

You might wondering, if people could see them in the wild, then why are still being kidnapped?

What would be best for these animals is to enjoy them at sea — their  natural habitat. Therefore, don’t take part in this atrocity of snatching them from wild and placing them inside a prison cell.