Can You Go Shopping With Your Pet?

While some stores and malls allow pets, there are still some small businesses that don't. In any case, you also need to decide if your pet will behave inside these facilities. 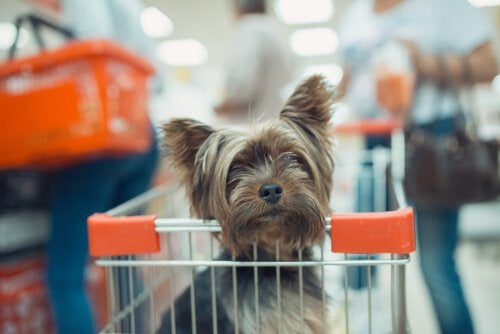 Pets have always been a part of humans’ lives. Even though there has always been a separation between animals and humans, little by little these beloved creatures have been making their way into more areas of their owners’ lives. For example, did you know that you can go shopping with your pet?

Yes, You Can Go Shopping With Your Pet

It’s been a long time since stores had not allowed pets to enter as a rule. There are still certain stores, such as food stores, where due to hygienic purposes, animals can’t enter. However, there were many other stores that made no sense of not letting come inside.

This has changed thanks to many non-profit associations that have struggled for years to preserve animal rights. Thanks to these organizations, you can now go shopping with your pet.

Some shops and malls now allow pets to enter clothing, perfume, jewelry, footwear and other kinds of stores. That’s why it’s increasingly common to see people with their dogs in large malls.

Although the pets won’t buy anything, pet owners like to have their pets with them. This could be because certain pets don’t like being home alone or the owner just wants their pet to be integrated into society and the real world, which they also are a part of.

While malls have allowed pets to enter, small businesses can make their own decision based on their own set of rules, whether or not animals are can enter the premises.

Tips for Shopping with Your Pet

Obviously, the fact that your pet is allowed to enter stores doesn’t mean that you shouldn’t take certain precautions and factors into consideration.

The Size of the Dog

If you have a big dog and want to go inside a small store with narrow hallways, don’t you think this could cause problems? In this sort of situation, you should use common sense. Although you might want to take advantage of new pet-friendly policies, your big dog might cause problems that could make some people frown upon these policies. So please, be think it over and make a wise decision.

Your pet should always be kept on a leash. No matter how well-behaved they are, it could bother or frighten some people to see your dog off leash. To prevent anything bad from happening, always have your animal on a leash and keep them as close to you as possible. If you have a mini pet, you could put them in your bag.

Another aspect to keep in mind is your pet’s personality. Everyone believes that their own pet is the best, but you have to be honest about their behavior. Does your dog nip or bite at people? Are they hyperactive and prone to knocking things over? Do they pull on the leash and ignore instructions? If your answer is “yes” to any of these questions, then you probably shouldn’t go shopping with your pet.

The fact that some stores allow pets doesn’t mean that all stores are obligated to. If you go into a store and ask if they pets are allowed, they have a right to say no. Just smile, say “okay,” and go on your way. You won’t gain anything by arguing. Also, you’ll be in the wrong since the store has a right to have their own policies.

You can go shopping with your pet, or take them to some restaurants, hotels, or salons. Just remember that the owner of the establishment is the one who decides whether or not to allow pets. Have a good attitude and be understanding when pets aren’t allowed. Arguing or being aggressive won’t take you anywhere.