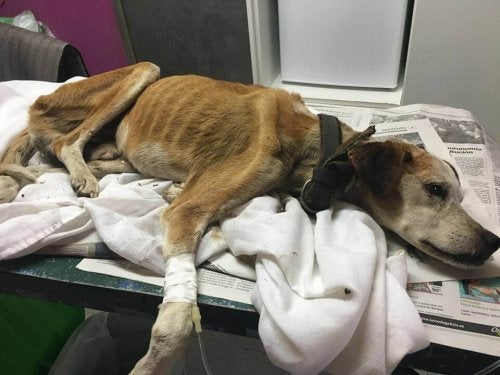 When you hear the word “trip,” what immediately comes to mind are vacations, dreamy beaches, or relaxing and not doing anything. However, Vali’s trip was very different one. It’s one we wouldn’t wish on anyone, although it also had its positive side.

If you want to hear his story, you are in the right place because we’re going to tell you it now. While the beginning is sad, the ending is happy.

The story of Vali, a very special puppy

This story comes from Spain, specifically from Cambados, in the province of Pontevedra. A neighbor found an abandoned and apparently very malnourished puppy. The dog was a Pointer. He was lying out in an open farm, without a roof to shelter him.

Vali was in a very advanced state of malnutrition, and his blood was barely pumping through his veins. He weighed less than ten kilos, despite his large size. When the neighbor took him to a shelter and the vets saw him, they thought that nothing could be done for him.

However, Vali was eager to fight and live. So only 5 days after being fed and cared for in the shelter, he was able to stand up. After a few hours, he took his first steps.

After a thorough examination by the veterinarians, it was concluded that he had not been fed for weeks, and he had been chained up for a long period of time. However, unfortunately we still do not know who was to blame for this.

Seven days after arriving at the shelter, Vali had already gained a kilo and a half, and his fur and skin had greatly improved. He ate anxiously, as if he wanted to make up for lost time or was afraid of running out of food again.

This story was posted on social media by the veterinarians at the shelter, and it didn’t take long before they received messages from hundreds of people who were willing to give Vali a new family and a new home.

However, Vali’s state was very delicate, so he still needed some recovery time. The families willing to adopt him would have to wait a bit. They would also have to be interviewed to determine whether they are the ones who should adopt him. We hope that very soon Vali can have a family that loves him and knows how to take care of him.

Dogs and their amazing resilience

Abandonment is always a sad thing to talk about, but stories like Vali’s give us hope. But he’s not the only one. There have been many dogs who have survived because of love and their will to live.