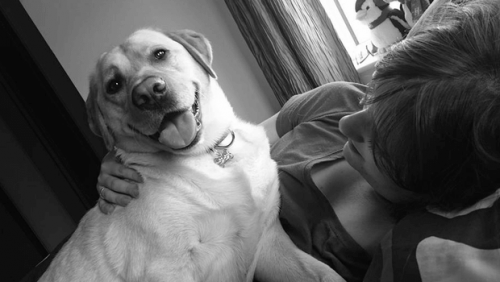 Dogs have a sixth sense. Somehow, they know what’s going to happen before anyone else. If we put that together with the fact that they love us like none other, and that they’re faithful to us no matter what, it makes sense that they would save us from harm.

In this article, we’ll tell you about how this dog’s love saved her epileptic owner’s life. We’ll share a few other beautiful stories as well, so read on!

Shannon Locke gets epileptic seizures fairly often. Recently, she became “famous” for sharing a video of her labrador, Poppy, reacting to a seizure.

About 15 minutes before Shannon had the seizure, Poppy sensed the symptoms and warned her about what was going to happen. Thanks to Poppy’s warnings, the woman laid herself in a safe position that would keep her from being injured.

In the recording, you can see how the dog licks her owner’s mouth to open the airway and keep her from suffocating. Poppy saved her life, and we want to recognize her heroic act.

Dog saves his owner from a fire

According to Scott Parker, he owes his life to his Great Dane named Clyde. The dog saved him when his house was burning down in the town of Kellerville, Illinois. The man had fallen asleep and didn’t realize that his home was engulfed in flames.

To alert him, the dog began to bite at his master’s shirt with all his might. At first, Scott thought it was a game or that he wanted to go for a walk. But since Clyde insisted, he realized that something bad was happening. A few minutes after he woke up, the roof collapsed very close to both of them.

Fortunately, Scott picked up the dog and they were able to leave the house unscathed. Thanks to Clyde’s warning, they are both alive today, and even a large part of his home was saved because he was able to call the firemen in time, who extinguished the fire before it moved from the attic to the lower floor.

Dog saves her owner after a car accident

Virtudes was driving her car along the road that connects the municipalities of Berja and Adra, Spain, when she had an accident that caused her vehicle to slide into a forested area on the banks of the Adra River (about 30 meters below the road). The woman was trapped for more than 20 hours and could have been for even longer if it had not been for her dog.

The dog got out of the car unharmed, and she immediately set out to save her owner. To do this, she began to bark desperately so that someone would notice that something had happened. A passerby heard her cries and called the firefighters. They arrived at the scene and were able to save the woman.

Dog saves his owner from murder

Wilson is an American bulldog who became a local hero by protecting his owner from being killed by a criminal who entered his home while trying to escape from the police.

This happened in the city of Atlanta. The criminal had killed a woman in Georgia and had driven away. When he was cornered by the police, he got out of the vehicle and started running.

To avoid capture, he entered the family’s house. The criminal had a gun, and he pointed it at the father’s head. As soon as the dog saw this, he didn’t think twice; he attacked, biting the perpetrator so hard that the man could not move. The dog’s heroic act gave the police time to intervene.

Source of the image: www.24horas.cl