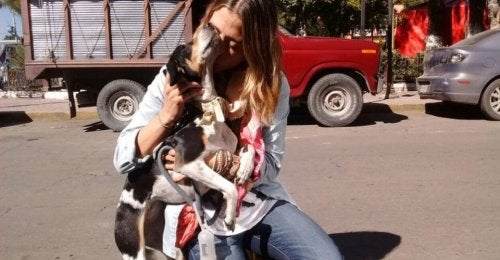 Traveling with your dog can be tough if you do so in a means of transport that doesn’t allow for him to travel next to you, like on a plane. But what if they also lost him? The despair would be unimaginable. Well, this is exactly what happened to a woman who was flying from Houston to Mexico. They lost her dog Mika.

The flight was run by Interjet, who lost the dog before the plane took off. Pamela, Mika’s owner, complains that no one even told her. She understands that this kind of thing can happen in a big airport. But she expected them to let her know and to fix it.

In addition, Interjet markets itself as a pet-friendly airline. That’s why Pamela had even more reason to expect them to care for Mika. In fact, this is a commonly-used claim in their marketing strategies, and if they don’t meet it they could be accused of false advertising.

Of course, as soon as Pamela found out, she got very angry and posted a photo of Mika along with her story on social media in hopes that someone would find the dog.

Interjet acknowledged their responsibility and also posted a message on social media, stating that they were engaged in the search. It went like this:

“At Interjet, we recognize the importance of pets and their value in the lives of their owners. Despite our efforts and working together with the owners, we have not yet been able to locate Mika. However, we will continue in the search with all the means at our disposal. We would appreciate any information that can help us locate her.”

Pamela could not stay in Houston and returned to the Mexico airport to look for Mika. According to passengers on the same flight, she was inconsolable. Once she got there, news arrived that someone had seen Mika outside the airport. Pamela’s desperation increased.

After two days of tears, Mika finally appeared. She was found by a veterinarian near a sports complex. The airline rewarded the vet with five thousand Mexican pesos.

To try to console Pamela and show their remorse, Interjet decided to give her ten free flights for her, her husband, and of course Mika. We do not know if Pamela will be willing to use them.

The airline rejoiced at Mika having been found and reunited with her owners. However, to cover their backs, they assured the public that this was an isolated event, saying that Interjet transports around 36,000 pets a year and nothing like that had ever happened before

Apparently, their excuse is that Mika’s cage fell from the suitcase conveyor belt opening, creating the perfect opportunity for the dog to escape into a strange, unfamiliar environment.

They also assured the public that they a problem like this will never happen again and that they will put in place the necessary measures to prevent it. According to them, the incident made them rethink the need to monitor the logistics of transporting pets and to ensure that everything goes smoothly.

We hope that this is how it actually will go and that we won’t see any more scary situations involving lost pets, with this or any other airline. However, we’re glad that they were able to recognize their mistake and make amends. Surely Pamela is too.

A story with a happy ending, although we hope it won’t be repeated. Pamela lost her dog, but she got her back. How about you, what would you do or how would you feel if the same thing happened to you?

Source of the main image: www.animalpolitico.com