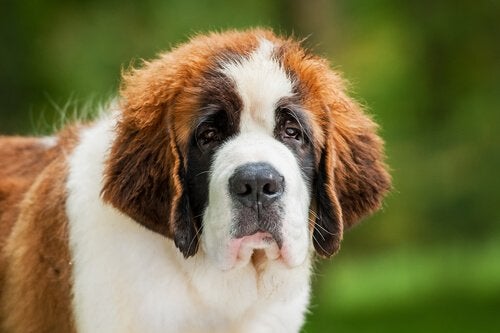 The Pope is certainly an important figure in the world. Who hasn’t heard of Pope Francis? Many say that he chose his name because of Saint Francis of Assisi. While we’re not completely sure, we do have one animal-related clue… This is the story of the Pope, a Saint Bernard dog, and a greeting.

Saint Francis of Assisi was known for his love of animals, and it seems that Pope Francis is not far behind.

The Pope greets a Saint Bernard

Although Saint Bernards are known for their kindness and noble character, what would you do if one came running at you? Would you dare to pet him? Probably not…

But when Magnum, a “small” dog weighing just 150 pounds ran towards Pope Francis, the Pope didn’t even flinch. He didn’t know the dog, and didn’t even let him sniff him but he pet Magnum and greeted him like a child.

What the Pope didn’t know is that Magnum had something in common with him. The Saint Bernard was part of a project called the Barry Foundation, located in a wealthy city of Switzerland and helping the most disadvantaged.

Claudio Rosseti was Magnum’s owner, and his objective of going to meet the Pope and take Magnum with him was to present their non-profit project, as well as one of its fundamental pieces, or rather, a representation of it: Magnum.

The Saint Bernard that the Pope greeted in the Vatican is just one of 40 dogs that the Barry Foundation is using to help children and the elderly.

These dogs psychologically, mentally and emotionally help children and the elderly who are in hospitals for one reason or another. As a kind of therapy, the dogs make their lives behind the cold walls of the hospital much more pleasant and their pain more bearable.

Publicizing this important work with someone as important and high-profile as the Pope is quite an achievement for the foundation. Now many more are aware of the existence of the Barry Foundation.

With this, they also want to make the Great St. Bernard Pass an identifying mark of the country, and it’s very likely to happen after this fortunate visit. They say that the first Saint Bernard came from that particular pass in Switzerland. In addition, the project is sponsored and supervised by UNESCO, which gives it the importance and seriousness needed.

The Pope makes a joke

The Pope didn’t just greet Magnum, but also listened to Claudio explain the project and even jokingly said, “Come back and let Magnum bring the bottle.”

Saint Bernards usually carry a bottle of whiskey hanging around their necks, used in rescue work. In fact, it’s one of the most well-known characteristics of the breed. If you see a dog and aren’t sure whether or not it’s a Saint Bernard, just look at its neck and see if there’s a bottle hanging there.

But what is not very clear is why the Pope asked him to bring it. Does he like whiskey? Joking aside, the believers of the religion are happy that the Pope is close and always willing to spend time with others.

If he likes dogs and treats them well, he’s already a few points up with those who might not be Catholic but do love animals. Will the Church win more parishioners for it? Time will tell…