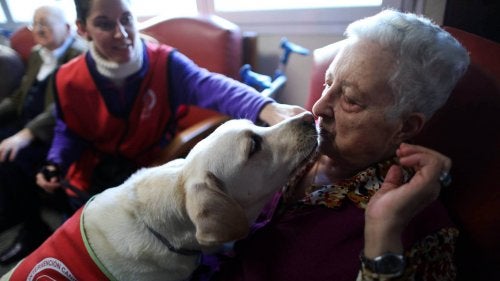 They may not have medical degrees, but believe it or not there are now “dog doctors” treating patients. At least that’s how the province of Madrid sees it. They aim to bring therapy dogs to educational centers, hospitals, and senior residences with the brand-new Canine Intervention Service.

Therapy dogs for children, the sick, and the elderly

The goal of this program is to provide support, care, and attention to children, the sick, and the elderly, without replacing conventional treatments, of course.

They developed the first pilot phase in 2017. The dog doctors of the Canine Intervention Service worked with people who lived in senior residences.

The then-president of Madrid, Cristina Cifuentes, went to one of these centers, Vista Alegre, to present the program. She announced that they would also implement it in the residences Dr. Gonzalo Bueno and Nuestra Señora del Carmen.

The idea is that these dogs will be able to help alleviate the physical and cognitive decline of the elderly. Bimba, Chester, Voll, and Sira are four Labrador Retrievers with special training for this noble task. The residents of Vista Alegre just love them.

What other places will the “dog doctors” go to?

They will also set up the Canine Intervention Service at the Reina Sofia Foundation. There, the dogs will work with people who have Alzheimer’s disease.

As for hospitals, the initiative will join a program that had already been implemented at the Gregorio Marañón University Hospital. The following hospitals will also benefit from this program:

In addition, it will be implemented in certain schools, such as Nobelis (Valdemoro), San Jaime (Majadahonda), and CEIP Alonso Cano and Vicente Aleixandre (Móstoles). Here the goal is to work with students that have special educational needs like attention deficit hyperactivity disorder (ADHD).

In these three environments, canine therapy will always be done in outdoor spaces or places with direct access to them so as to prevent distractions and avoid transit areas.

Furthermore, they will analyze the benefits of canine therapy for minors that are going through a judicial process. This type of support is to calm down the children and thus get better testimonies.

In the program’s second phase, they are considering extending the service to other schools, hospitals, and senior residences. They will also address the issue of letting dogs visit their owners who have been admitted to a health center or live in a senior home.

Here are some images to show you what the Canine Intervention Service is all about.

The Regional Government is collaborating with the University of Rey Juan Carlos to run the program. The university has vast experience with this type of program.

They are also working and coordinating with the School of Veterinarians. In this case, they have developed health and zoonosis prevention protocols for dogs, which the Canine Intervention Service will use.

There are also animal welfare protocols, which will ensure that the dogs’ needs are met. They will also ensure that they receive good treatment from the personnel in every center they go to.

Cifuentes emphasized that “dogs are not only companion animals, but rather authentic allies when it comes to improving our health, education, and social services” [translation]. Hopefully we can give them back at least a fraction of all the love that they give to us.