Hoshi the blind dog and his guide dog Zen 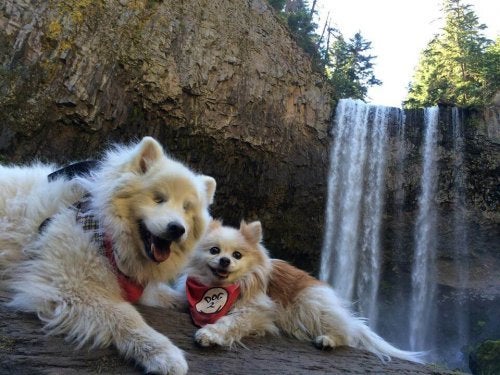 Guide dogs are specially trained to guide and protect blind people all over the world. Now, what if the one who’s blind is a dog? Maybe you’ve never thought about it, but today we’re going to tell you the story of Hoshi, a blind dog who has his very own guide dog.

The loyalty and love of animals transcends size, race, and color. This story is just more proof!

The story of Hoshi and Zen

When Hoshi was 11 years old he was diagnosed with advanced glaucoma. They needed to remove both of his eyes to save his life. It was certainly a radical and terribly sad change in Hoshi’s life. His life would never be the same again, or at least so he thought. His owners were distraught, but they had to accept the medical decision.

However, being forward-thinkers, they decided to adopt Zen, a little Pomeranian. This way, Hoshi wouldn’t be so lonely. But Zen came to be much more just a friend…

Once Hoshi had his operation and survived, it occurred to his owners to put a harness on both dogs so that they could walk together. However, it didn’t work.

They say that animals have a sixth sense, and in Zen’s case, it sure seems to be true. It seems that Zen knew very well that his new friend couldn’t see and that he needed help. So he started to guide him by barking. Later, he guided him with a leash they were both attached to.

Zen makes a very natural guide dog, and Hoshi seems to trust him completely. They’ve become inseparable and now go everywhere together. They’ve forged a deep friendship and don’t have the prejudices that we humans do. The most interesting thing with Zen is that he isn’t even a guide dog. He’s never received any training but he plays the role to perfection.

Hoshi and Zen’s owners thought their story was so special that they couldn’t keep it to themselves. They decided to share it on social media, but they didn’t expect the response they got.

Hoshi and Zen have gotten famous on Instagram, Facebook, and everywhere. In fact, they have over 25,000 followers. Every day they publish photos, videos, and strange but funny poses of the two special little friends. Their fans can’t get enough!

Animals have proved themselves to be quite loyal, and not just to people but also with other animals, whether their same species or not. Hoshi and Zen are no exception.

In fact, we’ve also heard stories of friendships between animals of different species and how they’ve cared for each other even though they “should” see each other as a threat!

Animals have so much to teach us. Their loyalty and openness teaches us a valuable lesson that honest feelings are much more important than appearances. Love, friendship, and faithfulness are what matter. So let’s take a cue from animals, love, and make the world a better place.

This question sparks a very controversial discussion nowadays. Whether or not we should clone dogs combines science with deep ethical questions. Here, we'll talk about this question from all points…

Since the time this virus appeared and put the entire world population in check, many significant events have taken place...…