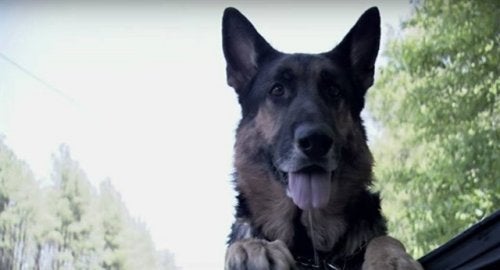 Recently, a video circulated on the Internet, in which a woman was injured in a car accident and no one came to her aid. This demonstrates just how far human coldness can go — the opposite of the loyalty and affection that animals give us. This is the story of a dog that saved an injured woman’s life.

The phrase, ‘animals are better than people’, is becoming widespread. As time passes, and more humans seem to become colder to others, the more we appreciate the gesture of animal.

The dog that saved an injured woman’s life

When an accident occurs, the urgency with which one acts is vital to determining if the person involved in the accident, lives or dies. That is why this story of the dog that saved a woman after she had an accident, is especially heartwarming.

In this case, a woman was injured in a traffic accident. Shanon, the victim, was driving on a Georgia road when she drove around a curve that was larger and sharper than she was expecting.

Before she knew what had happened, she was unconscious. When she woke up, she realized that her car was locked and she struggled to move. Moreover, because of the strong wind that was blowing, she could not open her door.

The car was hidden in a ditch so even if other drivers passed by, they could not see the car. She feared the worst at this point.

What she least expected was that her savior was already on the scene and ready to help. And here our protagonist appears: Hero, a beautiful German shepherd who fought for Shanon’s life when she could not.

Hero was not short-sighted or lazy, and he entered the vehicle to figure out if Shanon was ok. Hero soon began to pull the collar of her shirt to try to get her out of the car. Shanon says: “He was pulling and pulling without giving up. He was fighting for my life, because I could not.”

Hero’s perseverance had good results, because he managed to get Shanon out of the car and take her to the road where they could find help. Once Shanon got help, she states that she fainted and that she woke up in the hospital without remembering exactly what had happened. But she could never forget about Hero.

She soon learned that Hero was abandoned and although she wanted to adopt him, she was unable to do so. However, thanks to the story’s publicity, Hero received his reward and his luck changed.

Although Shanon could not adopt him, there were many who also appreciated his skill and courage. Hero was  finally adopted by a dog trainer who will train Hero to become a search and rescue dog for police officers. Bravo Hero and good luck!

The love of animals towards people

Of course, animals always surprise us when they have warm feelings towards humans. As time passes, people seem to move away from close contact with animals. Some animals are afraid of people because of the damage that humans have done to them throughout history. But animals do not fight fire with fire.

Today’s story fully demonstrates this. Hero could have walked by Shanon, sniffed her a little and left. Or he could even have helped Shanon by going towards the road to attract someone.

But Hero fought and used all of his strength and energy to save Shanon.

We see similar stories to this example of Hero and how he saved an injured woman’s life. And yet, there are still people who doubt that animals have feelings.