These tigers are similar in appearance and behavior. However, many of them are in danger of extinction 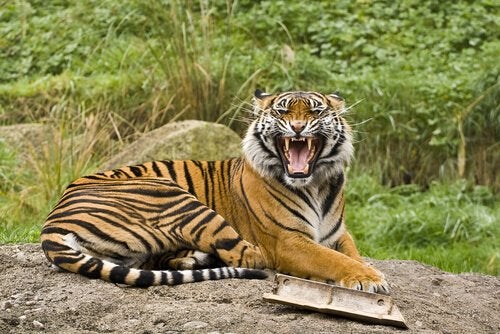 Within the feline family, the genus Pathera tigris only lives on the continent of Asia. They’re the largest carnivorous predator in the world- along with the lion- and there are a total of five subspecies of tigers. Would you like to know what they are? If so, continue reading this article.

What are the subspecies of tigers?

While they’re very similar to each other in terms of fur, habits, and diet, each tiger subspecies has their own traits. Of the six that currently exist, these are the five most common tiger species. The remaining one is the Amoy, which is probably already extinct.

With a worldwide population in of 500, the Sumatran tiger — in the picture above — is in critical danger of becoming extinct. They are only found on the island of Indonesia, in the forest, plains, lowlands, and mountains.

It’s the smallest of the current tigers: males measure a little over two meters and weigh around 120 kilos. Their stripes are thin and they have well-developed manes. They also have webbed-paws that help them swim.

This is another subspecies of tigers that are in a critical condition of extinction (there are about 500 in the wild). They live in certain areas of the Malay Peninsula that belongs to Thailand and Malaysia.

The male Malayan tiger can reach up to 260 centimeters in length while the female is a little smaller: about 240 centimeters. They feed on deer, wild boar, and pigs, although sometimes they also hunt bear cubs, baby elephants, and baby rhinos.

Also known as the Corbett’s tiger, they live in Cambodia, Laos, China, Malacca (along with the Malayan tiger) Burma, Vietnam, and Thailand. This tiger is also in danger of extinction due to their population in the wild being around 1,300.

Males weigh a little less than 200 kilos and their fur is a little darker than other tiger species. It’s a solitary animal that feeds on medium and large ungulates such as the sambar deer, as well as wild boar and native bovines of Indochina.

This is probably the most well-known and most widespread subspecies in Asia: India, Bangladesh (it’s the national animal in these two countries), Tibet, Nepal, Bhutan, and Burma. However, just like the others, it’s in danger of extinction.

The Bengal tiger’s fur is orange or tawny and, due to a genetic mutation, there may be white spaces with black stripes. It’s one of the largest of the species with males exceeding three meters in length and 200 kilos in weight.

They live alone and are grouped with their young until they can stand on their own. Most cubs are born between February and May after a 100-day pregnancy. The litter can have up to six cubs that are born with their eyes closed. Cubs will stay with their mother for two years.

The last of the subspecies of tigers has several names: Amur, Caspian, Persian or Siberian. They live in the forests in the extreme southeast of Russia, on the border of China, in the Amur River region.

They live in the Taiga with other large predators such as wolves, bears, leopards, lynx, and wolverines. They feed on ungulates, wild boar, elk, and Japanese sika.

The Siberian tiger plays an important role in the culture of the region. This amazing tiger is found on the outskirts of several cities (like Vladivostok and Irkutsk), and it’s part of a regional soccer team and was even the mascot at the 1988 Olympic Games in Seoul.