These animals had the misfortune of being so severely injured that they couldn't survive on their own. Thanks to the generosity of people and technological advances, they can live a decent life, even though they can't return to their natural habitats. 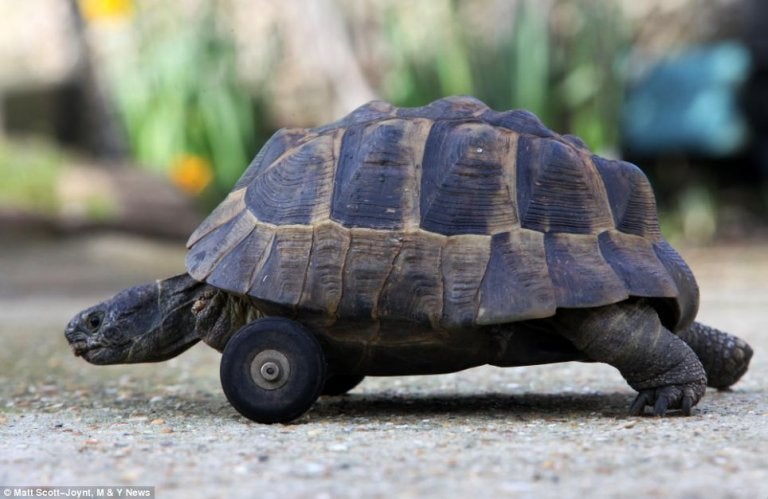 Due to birth defects or serious injuries, some animals lose body parts that they can’t live without. Legs, shells, and even beaks have been rebuilt thanks to the kindness of humans and technological advances. Read this article to find out which animals with prostheses have gotten a second chance in life.

Now, it’s common to see dogs in wheelchairs. Fortunately, mobility problems or the loss of vital limbs are no longer a threat to the lives of animals.

However, these advances haven’t just benefited pets– many wild animals have survived because of prostheses. Although prosthetic limbs have to be maintained, these animals often can’t return to the wild, and have to stay in shelters or recovery centers for the rest of their lives.

Some companies are dedicated to making animal prostheses, but many of them still depend on the ingenuity and skills of humans. In the examples below, you can look at a combination of those two things:

Winter is a dolphin who was found wounded on the coast of North America when she was very young. Vets tried everything, but Winter’s rear fin was so damaged that she ended up losing it. A while later, scientist made her a new fin, which is the first of its kind worldwide.

A film inspired by Winter’s perseverance starred Winter herself. It was such a hit, that they shot a sequel to it a couple of years later. Thanks to Winter, today there are more animals with prostheses just like hers.

Oscar the cat, also known as the Bionic Cat, had an accident with a combine harvester and his two legs had to be amputated. When they found him, he was so wounded that they thought there was no hope for him.

However, the veterinarian who first attended him saw that it was possible for him to recover. Thanks to the help of two different universities, they not only managed to give Oscar two new legs which he uses to live normal life. The same technique that was used on Oscar is now being applied to humans.

After being shot by a poacher, Beauty the bald eagle lost the majority of her beak. This body part is important for this animal to feed and clean himself. Despite his destroyed beak, his vet was determined to fix it.

With the help of an engineering company that had never done anything like this before, they managed to rebuild Beauty’s beak. Now she can live a normal life, eat on her own, and clean feathers like any other eagle. This type of reconstruction has opened a new path for animals with prostheses, especially for birds.

The photo at the top of this article features Septimus the tortoise, who was attacked by rats while hibernating, and he couldn’t defend himself. When they found him, the rats had done so much damage to his front legs that the only option was to amputate them.

Fortunately, his owner had a couple of model airplane wheels at home. They adapted them to fit his body, and a vet stuck them under his shell. Septimus survived, and can even move faster than before.

When he was young alligator named Mr. Stubbs lost his tail in a fight. He was found several years later, with the wound already healed, but with serious side effects. Without his tail, he couldn’t submerge himself to hide, so he was condemned to spending his life on the surface without being able to hunt like the rest of the alligators.

Mr. Stubbs is the first alligator to receive a prosthesis, and he has adapted to it perfectly. However, he is re-learning to swim because hadn’t practiced after so many years.

Thanks to creative and skillful people, and companies that are pioneers in 3D printing materials, many animals around the world are receiving prostheses. Therefore, situations that threaten an animal’s life are now only becoming inconveniences.