These accessories cause potentially irreversible psychological damage. They can also do physical harm and damage your dog's breathing, metabolism, nostrils, neck, etc... 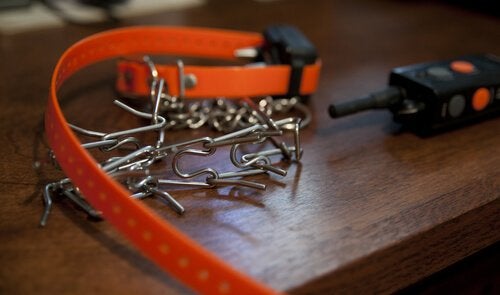 There are still people using punishment collars to correct their dog’s behavioral issues. Luckily some countries are starting to ban them because they do more harm than good. In today’s article, you can find out why punishment collars are such a problem, and how they put your dog’s health at risk.

What are punishment collars?

Punishment collars (also called “training” collars) are practically designed to hurt your dog when they do something bad. The objective is to get it to stop misbehaving. For example, pulling on the leash, barking, or being too intense around other dogs.

However, these collars are useless and all they do is physically and psychologically harm dogs. Dogs bark for many different reasons and the same is true when they pull on the leash. Punishing a dog when they do something you don’t like it isn’t training them at all. To actually train a dog, you have to show them the way you want them to behave, not the way you don’t.

A collar goes around a dog’s neck. Like other mammals, this is an extremely delicate, important part of their body. The throat isn’t just a place they use to make noise, it also has glands — such as the thyroids — that secrete hormones. Some of the main nerves in the spinal cord are also in the neck.

Research has shown that punishment collars cause constant stress, which increases cortisol levels that cause bad moods, along with a decrease in calmness, happiness, and sleep hormone production. The result of all that is irritability, an inability to rest, and a tense emotional state. Then you end up having a pet that little self-control, which just causes more behavioral problems.

Choke collars have metal prongs that stick into a dog’s neck when they pull too hard. One problem with these kinds of punishment collars is that they can be extremely painful even if they have plastic coverings.

They often cause physical wounds and sores. The prongs can pierce the skin, and the constant rubbing only irritates dogs even more. The pressure this collar puts on a dog’s trachea can cause chronic coughing or even a tracheal collapse. These things can prevent your dog from getting all the oxygen they need.

The prongs put a lot of pressure on those hormonal glands, which can change the way they work. Your dog might start to have problems related to its thyroid, metabolism, lymphatic and circulatory systems. The pressure can even cause autoimmune conditions in some cases.

Spinal contraction and other related issues are common in dogs that wear leashes. This number goes way up if they wear a choke collar. The pain doesn’t just affect their well-being, it also has an impact on their behavior. It makes them afraid, and can often lead to aggressiveness.

Shock collars send an electric charge to a dog’s neck. Different collars have different voltage levels, and some have a vibrate option, but they’re all painful, uncomfortable, and confusing. If they weren’t, they wouldn’t work.

On top of all those things, it sends an electric current through a dog’s entire body. There are nerves that connect directly to the spinal cord in a dog’s throat that also connect to the brain and other parts of the body. Shocking its neck has a much bigger danger than most people think.

Luckily they’re not common. However, when they are used, they spray an aerosol (usually citronella), right into a dog’s nostrils. As everyone already knows, dogs have a strong sense of smell, and their noses are very sensitive.

Using something this aggressive on their nose can irritate their mucous membranes or change the way they function. These collars can cause dryness, excessive wetness, pain, and loss of sensitivity. It can even damage their odoriferous glands, which will prevent them from exploring the world and communicating with other dogs the way they normally do, through their nose.

the sense of smell is very important a dog’s well-being. It’s how they explore the world and communicate with other animals. A dog without a sense of smell can’t be happy, which is a major psychological issue.

These collars have psychological consequences that are far greater than the physical ones. Punishing dogs during training never — it usually just worsens the behavior you’re trying to correct.

Continuous punishment can cause insecurity, stress, and fear. Those feelings are even worse if they are accompanied by pain. Fear and stress are the two biggest causes of aggressiveness in dogs, which obviously is why there are so many cases of bites and attacks.

The psychological damage caused by these collars is hard to undo. Any negative associations your dog makes with this collar could be impossible to erase.

Besides, punishments are never the way to solve a behavioral problem. Most of the time, a dog doesn’t even understand why it’s happening. Using these products doesn’t help dogs understand what you are trying to get them to understand.

Punishment collars should be out of the question when it comes to training your dogs. They’re completely dangerous and they can cause irreversible damage. Theories about training dogs have improved in comparison to last few decades, so thankfully there are other techniques that are much faster, safer, trustworthy, and easier to do.