Search and rescue dogs in Ecuador: an incredible work 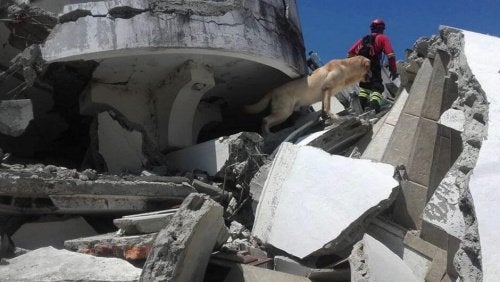 In extreme situations and awful natural disasters, man’s best friend is irreplaceable. We saw how true that is in the earthquake that devastated northwest Ecuador two years ago. There, search and rescue dogs were vital in finding people buried underneath the rubble.

Around 120 dogs specially trained to carry out this type of work — both local dogs and those belonging to aid groups from different countries — were sent to the areas most devastated by the earthquake, which reached a magnitude of 7.8 on the Richter scale and gave numerous aftershocks.


Search and rescue dogs are more effective and quicker than machines at detecting survivors. But they also do something that no machine has been able to do up to this point: they can also locate bodies underneath the ruins.

In fact, in the search for people trapped among the rubble, it’s been proven that dogs can track 100 meters² in five minutes. A human, with the right instruments, would complete the same task in 45 minutes. In times like these where time is of the essence, there’s no questioning the vital nature of search dogs and their work.

How search and rescue dogs work

In addition to their great sense of smell and hearing, we should also note their intuition and stubbornness as rescuers. When a dog detects a person, dead or alive, she finds a way to get the attention of the aid workers. For example, she may begin barking, run around that particular spot, and sit down at that spot and not move.

A dog of any breed far exceeds the most sophisticated technology we have in this modern age. Another example is search tools can find victims up to a maximum of 5 meters deep. But dogs can do so up to 10 meters and, of course, much more quickly.

But as they do their job, moving among the rubble, the dogs get cuts on their legs and paws. That’s why donations of shoes and boots with rubber soles and elastic bandages were requested to protect our canine heroes.

Search dogs are also not exempt from becoming victims in the midst of disasters situations. That is tragically what happened to Dayko, a four-year-old Labrador retriever who died from dehydration after rescuing several people.

Although medical professionals were able to stabilize him and transfer him to another city, the animal couldn’t recover after days of intense searching.

Traits of search and rescue dogs

Although any dog is capable of being a good search and rescue dog, trainers seek out dogs with the following traits.

Other areas where search and rescue dogs are used

Although their work in the search for survivors of natural disasters is of the utmost importance, search and rescue dogs have also been used with remarkable success in finding:

It’s ideal to for search and rescue dogs to begin training as puppies. With consistent, specialized training they learn how to save people’s lives.

Link copied!
Interesting Articles
Wild Animals
Discover Why There Are Raccoons in Europe