Striking Photos of a Dog Burying His Canine Brother 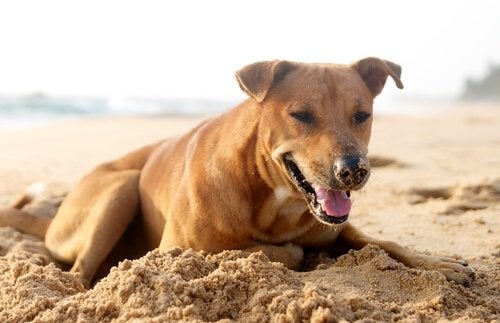 The internet is a huge sounding board, a place where things go viral at impressive speed. It is also a place where information doesn’t have to be precise, especially if it’s already been fact-checked. The only things that seem to matter are pictures and how much impact they have.

The video of a dog burying his supposed canine brother is a perfect example of the above. Someone captured the moment on their camera and posted it on social media. Then, mass media takes the “news story” and spreads it.

But, beyond the few seconds of the video, we don’t know much more about what happened. The event is supposed to have taken place in the Thai province of Buriram. And although the story has been very popular recently, the images have been on YouTube for over a year.

As far as we know, the deceased canine had been run over on the road. Then, the other dog proceeded to dig a hole and take the body to it. But these are two things are not shown  in the video. However, you do see the dog using his snout to cover the dead animal with dirt. The part about being moved by the dogs “human” actions was added by viewers.

Recently, a video of a dog burying another dog went viral on the internet. Beyond how moving the images are for many, we would like to make our readers think about the growing phenomenon of humanizing pets.

We are in no way trying to minimize the real suffering dogs experience when their loved ones die, whether people or other animals. You don’t even have to go to the internet to hear stories of pets who refuse to leave their owner’s grave, dogs who get depressed when their fellow animal friends die.

But we do think it important to point out that, perhaps, the dog’s act of covering his canine brother with dirt has little to do with the custom that humans have of burying the deceased.

We humans are just like that; we tend to measure everything with the same yardstick. In other words, we personify animals. That’s why we attribute human qualities and customs to our pets and don’t respect their own.

A Few Facts About Dogs and Burials

An animal behavior expert would look for a more precise explanation as to why this dog buried his friend. Here at My Animals, we want to mentioned two aspects of instinctive behaviors that dogs have, and that could be related to what we see in the video.

First of all, when female dogs give birth, they eat or bury the puppies that die. It’s something they have been doing for centuries. When dogs had not yet been domesticated, they needed a clean “burrow” to protect their other offspring. Also, the smell of a dead animal would be sure to quickly attract predators.

If you search on YouTube, you’ll see videos of female dogs burying their puppies. Because we’re human, we highlight the sweet canine mother’s “human” attitude, burying her baby.

The Canine Habit of Digging Holes

Secondly, another ancestral canine custom is to dig holes and bury things in them—especially food. Long ago, dogs didn’t have a bowl full of food waiting for them every day. Dogs are so big on burying their food because their ancestors did it to keep others from finding it.

We’re not trying to rain on anyone’s parade or taint a nice video. We simply want to provide another perspective on the topic and open the debate up a little. Not everything is the way it seems. However, that certainly doesn’t mean that animals aren’t wonderful creatures with so much to teach us human beings.