Home » Latest News » Tekis: The Man Who Rescued Over 200 Abandoned Dogs in Greece

Tekis: The Man Who Rescued Over 200 Abandoned Dogs in Greece 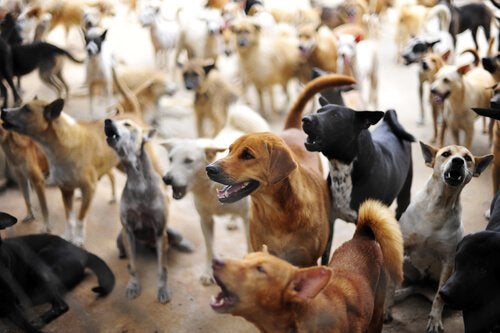 The economic crisis in Greece was terrible for its human inhabitants, but it was also very bad for pets. When there is no money for food and there is no food to buy, everything becomes chaotic and everyone looks out for themselves. It may seem a bit selfish, but until you find yourself in a situation like that, it’s hard to be sure what you would do. Tekis, though, was no ordinary man.

What if you had to choose between feeding your child or your dog? What would you do? Unfortunately, many people found themselves in this exact position. Therefore, a large number of pets were abandoned to fend for themselves, without a home and without a bowl of food to fill their stomachs.

However, everything was not lost. They say that everyone has their own guardian angel, and in the case of the abandoned dogs in Greece, that angel’s name was Tekis.

Tekis is a resident of Greece who has been working as a dentist since college. He is 44 years old and could not stand the situation many animals in his country were facing. To help them, he decided to give up his job, sell his car and his trailer, and create a shelter for them.

No one helps him, and he is alone in a shelter that already houses over 200 dogs. He has no money left and he even had to ask for a loan to continue carrying out his plan. However, he seems set on the fact that no one is going to stop him.

It all started when Tekis started seeing animals with broken legs on the street, and brought them water and food. “I was thrilled when I saw that they were recovering. I was happy to help them and that’s why I started the shelter. ”

In the photos that Tekis shares, you see dogs that are malnourished and on the verge of death. Little by little, they are recovering Tekis’ shelter that measures over 5,200 square meters. For Tekis, this implies a cost of 1,300 euros per month for food, plus 700 euros for veterinarians. For a man without a job or anything, not even a car, it’s a lot.

If you want to lend a hand, go to his Facebook page where he uploads daily photos of the dogs he rescues. Tekis is, without a doubt, a brave man who deserves all of our admiration.

However, Tekis isn’t the only one to take on an initiative like this. Many people have been willing to give everything in order to rescue animals, and here are a few of them.

Other People with a Heart as Big as Tekis

As you can see, there are still people in this world who are supportive and kindhearted and willing to give everything to help others. If you want to support any of these causes, just look for their Facebook pages. Their stories are being talked about all over the Internet, and we couldn’t be happier.