The Astronaut Who Wanted to Take a Photo with His Dogs 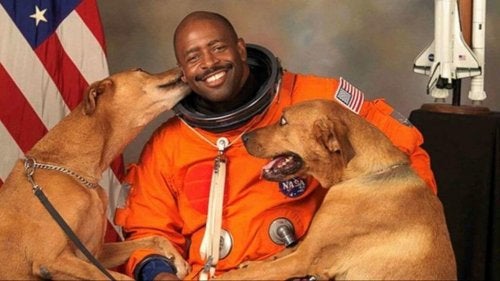 Some news stories arouse interest because they are unique and original. Others are about things that have never been done. That’s what happened in this story about an astronaut who did everything he could to be able to include his dogs in his official photo. We’ll tell you why!

The story of a famous astronaut

His name was Leland Melvin. He is one of the most famous astronauts in NASA’s 60-year history. He has participated in several missions that have led him to spend about 565 hours in space. However, achievements like that sometimes go unnoticed in the world. Thus, Leland became famous for something much more trivial: he took a photo with his dogs.

The photo of an astronaut with his dogs

Every astronaut has an official photo recognizing his accomplishments. It is a picture taken by NASA that distinguishes him as a community servant in outer space, willing to do anything for his country.

As you might expect, these photos can be taken with family members or the people you love the most. But Leland chose to take it with his dogs. Why?

Leland explains it this way,

“When you take your picture, you take your family. But I wasn’t married and my family was all in Virginia, so I thought, ‘Why don’t I take my boys?’”

That was the answer he gave the well-known news site Huffington Post .

The photo, taken in 2009, was not revealed on the internet until 2015. A journalist discovered it and published it, making it viral. In fact, it was re-tweeted 52,000 times in just 24 hours.

However, it wasn’t the official photo. But it did allow everyone to see the great relationship and camaraderie that this astronaut has with his “family”.

How they became a family

Apparently, Leland rescued the dogs from the street a few years before the photo was taken. He found the first dog, Jake, abandoned on the street and took care of him. He offered him a new home, where he lives to this day.

Scout, however, was wandering aimlessly on the street without a collar or microchip, so Leland took him to his house. No one claimed him after a certain time.

That was how this beautiful family of three came together.

How the photo was taken

We already know that it’s not easy to take a picture with animals and get them to hold a pose. But it’s even harder to get dogs into NASA. How did they do it?

Obviously, animals aren’t allowed inside, so this was quite an adventure. Leland, however, was determined to take the snapshot with his family, so he hid the animals in his van with the music turned up to prevent their barking from being heard.

He showed his badge at the security checkpoint without a hitch, and once inside, everything was much easier. He kept the dogs still by giving them some bones.

They didn’t make a sound while they chewed the bones happily. Once finished, they went to their owner to show them their gratitude, and according to Leland, that’s when he told the photographer, “Dude, start shooting!”

Even though the animals sat up straight in the photo considered to be the official one, Leland decided that the first one should be official because it shows what a great relationship the trio had.

Although the dogs have since passed away, we’re sure that Leland loves that famous photo that became viral in recent years.

Zoology is the science that studies animals, so its scope of investigation is very wide. Moreover, it incorporates branches specialized…