The Young Man Who Risked His Life to Save a Dog 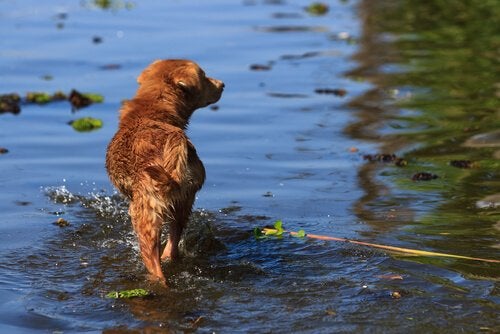 In times where we hear news about organizations who steal pets or organize dog fights, it is good to learn that there are people who risk their lives to save a dog. The story we will tell you about, took place in Peru. It was in the midst of the floods and avalanches that some regions of the country suffered recently.

The event took place in the area of ​​Punta Negra, a littoral locality, south of Lima. A dog was dragged by the waters of the Huaycoloro and Rimac rivers. The poor animal was trapped in the avalanche that affected water levels.

For those who do not know, an avalanche is a rapid flow of snow down a hill or mountainside. “Huaico” is a local term used in Spanish, to describe these natural disasters and affect the Quechua population.

Upon realizing what was going on, a young man did not hesitate to dive right into the mass of mud and stones that overflowed the waterways.

Laboriously, the man advanced to the edge of the river. The little animal was very scared and not sure what to do. The man picked up the dog and took it to dry and safe land.  The heroic act took place with the blessing of the area’s residents, who were following the whole event.

This is the story of a young Peruvian who did not hesitate to risk his life to save a dog that was trapped in an avalanche.

A rescue team tried to help the dog before, but the animal, probably out of the fear that caused the situation, moved further away. So, this is why the original operation was unsuccessful.

It was at the moment when the anonymous hero intervened. Seemingly without measuring the effect that doing so could have on his own life. He was able to successfully save the dog from the avalanche.

The images were captured by a local television channel who were covering news about the natural catastrophe that affected the Andean country.

Since mid-January 2017, the phenomenon known as, Corriente del Niño Costero has affected Peru and Ecuador. In Peruvian territory, rains, avalanches and floods hit the worst in northern and central areas of the country.

By the end of March, there were 98 deaths, almost 900,000 people affected and large agricultural and livestock losses.

However, statistics produced to describe natural disasters or damage caused by a war, shows that animals are often invisible victims. This is why we want to highlight the young man’s gesture to save a dog from certain death.

Here at My Animals, we think that stories about pets who were left in the middle of various tragedies, are always worthy of highlighting. For example, we recently shared news regarding earthquakes that recently occurred in Ecuador and Italy.

Here are a few other examples of the stories we want to highlight:

We have also highlighted the work of different organizations, responsible for helping animals who were left homeless, injured or wandering disoriented through the streets.

Other Heroes Worth Highlighting

It is good to highlight collective and individual actions of the people who do not hesitate to help animals at risk. Moreover, in some cases these people endanger their own lives to save them. Like our Peruvian hero, for example, as well as all these brave people:

Also, there are stories of dogs and cats who help humans in many different ways.

Keep reading! We will tell you more in future articles.

Be a hero for an abandoned animal