Family Tries to Abandon a Dog and People Boo

We love to see how people are more and more aware of the need to end this evil once and for all. 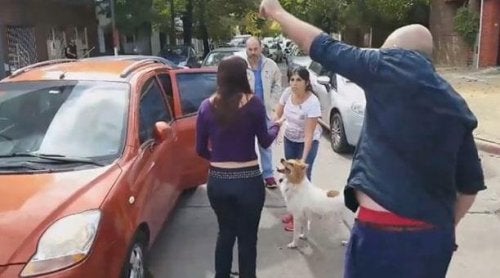 Abandonment continues to be an evil that seems to have no end. This was the case when a family was booed for trying to abandon their dog.

It seems that they were not even careful to do it secretly. In fact, they were discovered by many people, and it turned out badly. We tell you the story.

A family wants to abandon their dog

The event happened inLa Plata, Argentina. What would you do if you saw a dog desperately running kilometers behind a car because its owners wanted to leave him on the street? Would you stand in front of the people and reproach them?

Well, in this story there was a driver, along with other observers who also supported him, who did that. With a bad temper, yes, but those who abandon animals do not deserve anything else.

It seems that the animal chased after his owner’s car down a road in the city, desperate upon finding himself alone and helpless in a place unknown to him.

This driver had the courage to follow the car, pull his car in front of theirs, cutting them off and getting out to reproach the people who wanted to commit this great evil against the animal.

A beautiful animal, by the way, with a long white hair and brown spots and apparently very affectionate. Because of his attitude, when he got into the car, he was eager to see his family and to return home.

At first, the family did not want to show their faces, but the brave driver who stopped them did not leave the car alone. He even held on to the mirror, keeping them from being able to move.

What happened after they abandoned their dog

Using insults, something with which we do not agree but got results, he managed to get a person to get out of the car. Then, he forced her to let her dog into the car. Later he assured them that he was going to follow them to their door to make sure that the animal went back home and that he would not be abandoned on the road again.

Despite stopping the traffic and the scandal that mounted, the line of cars was enthralled by the matter. No one complained about being stopped. This may be due to the fact that more than 80% of the Argentine population has a dog, which is why it is an animal that is much loved by the country.

In spite of everything, there is always someone who has to give in to abandonment without apparent reasons. But this time it seems that they did not get away with it. Although really, thinking dispassionately, we do not know if it is good for the animal to live as a pet with such people. It’s quite a pity, but abandonment is still on the rise throughout the world.

Let’s do something to stop abandonment

If this story has made one thing clear to us, it is without a doubt that if each one of us does our bit to stop and eradicate this evil, we can achieve it.

This man was brave and took a risk, even knowing that it could get out of hand, but he achieved his goal: preventing an animal from being abandoned.

What do you think would happen in the world if we all did the same? Without a doubt, abandonment would end. And is not that what we all want? Fight, be brave and denounce any act of abandonment that we see. That is the best we can do to put our bit of effort into this fight.

Do not stand by when faced with abandonment. Do something! The animals will thank you, and life will be better for them and for us.

Source of the image: www.newsjs.com