Walnut’s Farewell: The True Story of a Loving Goodbye 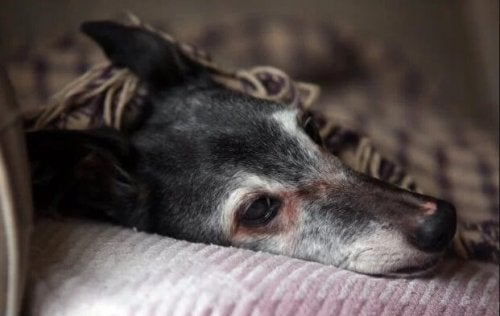 Mark Woods learned that his dog, Walnut, 18, must be put down because he had a horrible disease. So, he decided to take him for his last walk surrounded by many people and other pets.

Walnut was a Whippet dog who lived with his family on the coast of Cornwall, England. He loved to go for a walk on the cold beach, almost always in the morning when everything was calm. His owner, Mark, took advantage of those moments to talk to his dog and enjoy his pleasant company.

Over the years, Walnut could no longer walk along the beach as much. His legs did not respond, and he preferred to stay at home sleeping all day. The dog had already turned 18 years old. When they took Walnut to the veterinarian, he recommended to the family that they give him an injection to leave this world in a gentle and painless way.

To summon all those who would like to accompany their dog on the last walk of his life, Mark Woods put the following message on Facebook: “With much sadness, I will have to put Walnut to sleep next Saturday. Our last walk through Poth Beach will be at 9.30. I would like all pet lovers, dog owners and friends to join us in this walk on the beach. He has had a wonderful life and has reached the advanced age of 18 … He is ready for his final sleep. We are waiting for you all. ”

The owner wanted the last moments of his faithful friend to be a celebration. That’s why he was surrounded by friends and other pets, not sadness. Many people responded to the invitation and accompanied Walnut on his last walk. It was undoubtedly a more than emotional moment.

Mark walked his dog all over the beach. Meanwhile, the participants approached with their animals to pet the old dog and wish him a happy farewell. And that was not all. What’s more, the walk was done in other parts of the world: people in Australia, the United States and several locations in the United Kingdom uploaded photos with their dogs and the hashtag #WalkWithWalnut. The story even made it to the local news. This Morning, and then the BBC network did a story on Mark in the middle of the walk.

The day after the walk, Mark posted on Facebook the news that the dog was already resting in peace: “Walnut died at 11:56 with my wife, my two children and my other three Whippets: Monty, Nelson and Charly by his side. We were all with him until the last moment. He went quickly and in my arms. I am writing to thank all those who supported me, but especially those who accompanied Walnut on the walk. Also, to those who had their own walk with their pets around the world. I am very grateful to everyone, I have received messages from everywhere. I hope to respond to all. Heartfelt thanks.”

Walnut’s last hours were full of love and friendship. He was in the place he liked so well with his owner and friend, but also with many other people and pets around him. Farewells are never easy and without a doubt the death of our animals marks our soul. But at least this family has the consolation of knowing that Walnut was very loved in his 18 years of life and that, in the end, he received the affection of many who he did not even know.

In his last minutes, Walnut only paid attention to the man who had accompanied him for almost two decades and who was his best friend. Undoubtedly, an emotional story of loyalty and completely selfless love.