What Should You Do if Your Dog Doesn't Eat Dog Food?

One of the reasons why dogs show a lack of appetite might be due to the condition of their mouths or teeth. That's why you should take a good look at your pet and take them to the vet when there's even the slightest indication of a problem. 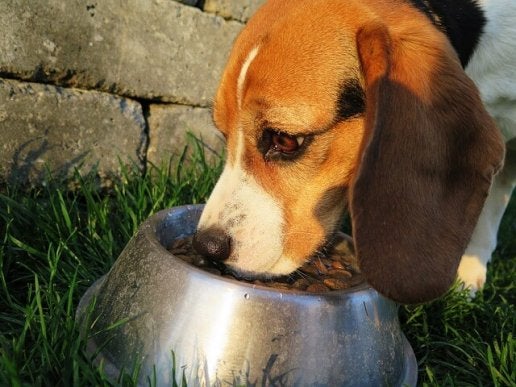 Has it been a while since the last time your dog has eaten dog food? Sometimes your dog doesn’t eat their food because they feel like it. But a sudden lack of appetite could be due to several factors.

Without a balanced diet, your dog could get sick. Therefore, when a dog doesn’t eat, their owners should act quickly to prevent any future complications.

Dog food, also known as dog chow, is processed food that’s meant for animal consumption. Dog food is mainly a mixture of different food products that can contain additives and be composed of organic or inorganic substances.

Some dog food is made in such a way that it fully meets an animal’s nutritional requirements. However, there are also foods that complement your pets’ diets.

Therefore, dog food is made with different raw materials and production processes. For this reason, each food is different, so dog owners should be properly informed before choosing what food they will give their dog. The nutritional needs of a puppy from a small breed won’t be the same as a large, elderly dog.

The reasons why a dog won’t eat dog food can be varied. It’s important for owners to observe their dog’s behavior closely. That way, you can notice any unusual behaviors that explain the lack of appetite.

If a dog stops eating completely and stops drinking water at the same time, you should take them to the vet immediately. The sudden lack of food and hydration could be signs of other more serious conditions.  Therefore, a professional should be the one to evaluate your dog.

One of the reasons why a dog doesn’t eat is because they have a small wound in their mouth. You should examine your dog’s gums and teeth carefully. If there’s any unusual redness or loose teeth, that would explain why they’re experiencing a lack of appetite.

Make sure you look for any changes in your pet’s appearance. Changes in the texture of their fur, dry nose, or wet eyes might indicate some other condition. Don’t hesitate to contact your veterinarian if your dog has any of them.

Your dog doesn’t eat their food: the dry food has gone bad

The food itself might be the reason why your dog is experiencing a lack of appetite. Therefore, you should check their food to see if the texture is right. Also, check the package to see if it has expired. Smell the food and look at its color. If you suspect that it’s spoiled, then throw it away and buy a new bag.

Dogs are creatures of habit and routines. Therefore, some dogs prefer to eat the same food all the time and reject any sudden changes. If that’s the case for your dog, then consider mixing the old food with the new one for a few days. That way, the change won’t be so sudden.

Some tips to solve a dog’s lack of appetite

If your dog stops eating because there is something wrong with their health, then you should consult with a veterinarian immediately. Some symptoms may be fever, diarrhea, vomiting, constant shaking, dry or too moist mouths and eyes, and pale gums. Don’t hesitate to take them to an emergency consultation.

If your dog doesn’t eat dog food due to the food itself, here are some simple solutions:

Commercial dog foods undergo rigorous chemical and biological tests. The purpose of these tests is to assure that foods don't…

Dry Food
How Can I Make My Dog Eat Normal Dog Food?

How can you make my dog eat dog food? That's one of the problems that many owners of these fantastic…

Dry Food
Best Dog Food: One that's worth your money

All the options available on the market can be overwhelming for a first-time dog owner, or for someone who's thinking…

Every dog is unique, which is why each one needs specific food according to his breed, age, and size. By doing so, you can help prevent your dog from getting…

If you are going through a challenging time financially, you may need to consider alternatives to having a dog at…

Animals
How Many Meals Should Your Dog Have?

You have finally decided! You are going to adopt a pet. It's your first time and you are very excited,…