How does the sound of rain affect dogs? 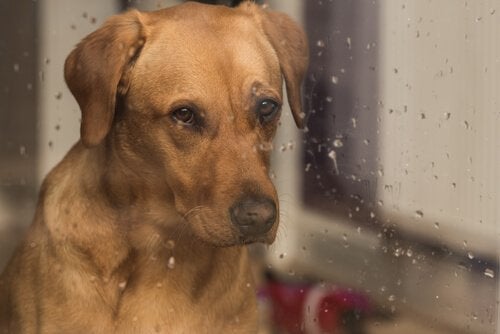 Dogs tend to be afraid of certain sounds or events that are out of the ordinary. Among these are storms and rain. Though it is not always storms; we have seen many dogs that get scared simply by rain. Why does this happen? What makes dogs afraid of rain, whether or not it is stormy?

The effect of rain on dogs

Maybe your dog loves water and goes crazy when you go to put him in the shower. However, if you take him out for a walk and it starts to rain, the discomfort that he feels leads him to run away and want to find a place to hide.

Feeling the water fall on his skin can make him nervous or anxious. This especially happens if your dog already suffers from one of these two conditions or if he is very sensitive. To help with this, if you live in a place where it rains a lot, take him out when the rainfall is lighter. Take an umbrella that can cover both of you.

Maybe you could first take him out in your arms and then put him under the umbrella so that he can see that nothing is wrong and that you will be by his side. It is also a good option to put a raincoat on him. This keeps the water from touching his skin. Little by little, he will get used to it and you will even be able to take him out when the rain is heavier.

Playing games under the water and even playing with it, perhaps splashing, will make your pet gradually gain confidence and increasingly like to go out in the rain.

We don´t know why rain is so annoying for dogs. It seems that the waves emitted by water damage the sensitivity of their ears, especially in puppies. This doesn´t account for how intensely storms can affect them.

It doesn’t matter if there is no thunder, your dog is able to predict that a storm is approaching and will tremble before the noise begins. Not only can he perceive the change in the sky, but also in the environment and the scent of the air. He can distinguish the sound of thunder from a great distance.

According to a study by the University of Pennsylvania, between 15 and 30 percent of dogs are terrified of storms. They become the picture of stress and anxiety, and they desperately seek refuge.

It is not unusual for dogs to seek shelter upon hearing thunder. This is a feature of their instinct that has not evolved. Many dogs’ behaviors have come from their ancestors the wolves, when they lived outdoors in their natural habitat.

When there was thunder and lightning, their instinct drove them to seek shelter in order to protect themselves from things that could fall on them. Also to avoid possibly being killed by a tree that had been struck by lightning, for example.

In addition, dogs have a much more developed sense of hearing than we do, so the sound of a storm is much louder for them than for a human.

There are several things you can do to keep your dog from getting too anxious when it rains. For example: