Sleeping positions: How does your dog sleep? 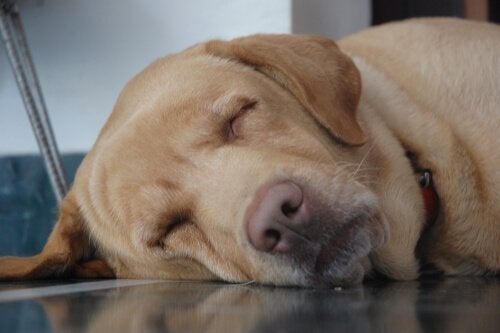 To get to know your pet’s personality, there is nothing more interesting than looking at their different sleeping positions. They can be pretty funny too!

Our furry friends talk to us all the time through their attitudes, postures and facial expressions. Maybe they can’t talk to us, but they use their bodies to express their thoughts, emotions and moods.

And believe it or not, their sleeping positions tell us a lot about their feelings. If you pay attention to how your dog sleeps, you may learn a thing or two about his personality.

Tell me how your dog sleeps, and I’ll tell you who he is

You may have heard that a person’s sleeping position says something about their emotions and even their health. Well, the same goes for dogs.

Does your dog sleep curled up?

Have you seen your dog sleeping all curled up, maybe on a cold day? His body curled up into a cute ‘ball of fur’ and his head resting on his legs, perfectly stacked on top of each other…

This is one of the most common sleeping positions because it conserves heat and lets less energy dissipate. So what does it mean? It means that your dog feels calm and safe in his home, a place where he feels free to express himself.

In this position, his front and back legs are fully extended and his belly is touching the floor, with his head generally between his two front legs.

If your dog sleeps like a doggy superhero, it means he is very happy and has a lot of energy. So don’t be surprised if your dog naps in sleeping positions like this one when he comes home from a walk all tired and happy.

Sleeping on his side: What does it mean?

Here is another sleeping position very common among dogs. This is mainly because it is very comfortable. Dogs opt for this pose when they feel calm and relaxed in their environment.

The classic, funny ‘passed out’ position

In this position, the dog lies on his back and rests his head on the ground. His front legs are resting on his belly, while his hind legs are stretched out towards the sky. Open sleeping positions like this one allow dogs to cool their bodies off quickly, as well as get up quickly if they hear a strange sound.

Does your dog sleep on his belly?

In general, this position is temporary and the dog will change sleeping positions before entering into deep sleep. His belly touches the ground with his hind legs fully open and one or both front legs parallel to the body. It is also a common way for more timid dogs to sleep, or when their home is still new to them.

This is the most entertaining sleeping position. Here, your dog’s back touches the ground while his hind legs are open and his front legs fall on his chest. There was a time when it was said that dogs ‘begged for rain’ when they slept this way.

How many hours of sleep does a dog need?

Many owners worry about the number of hours their dogs sleep, especially when they are puppies. We’re so familiar with the metabolism of our own bodies that it may seem like our pups sleep too much. But actually, dogs need more hours of sleep per day than humans do.

The number of hours an adult dog needs to sleep varies according to his age, size, and state of health. In general, smaller breeds need less sleep than larger breeds. While small dogs usually sleep between 14 and 16 hours, the bigger ones can sleep up to 18 hours a day.

A young dog who has just entered adulthood will still have much more energy than an old dog, for example. The same logic applies to healthy dogs, who have a more active metabolism and more physical stamina. In fact, excessive tiredness and sleepiness can be symptoms of many different health issues.

In addition, a dog’s routine also plays a central role in the number of hours he will sleep. A sedentary dog may sleep more hours per day just because he lives in a less stimulating environment.