What does your dog feel when he sees you? 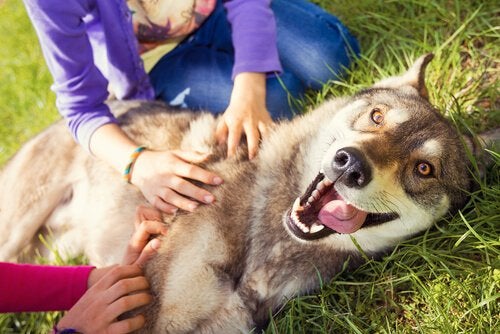 Dogs always tend to have a leader of the pack, which in this case is their owner, hence this dependency relationship by which they express their emotions. This reaction comes from their past, since wolves — their predecessor — also follow their “boss.”

The human race has lived with dogs for millennia. Dogs have been our faithful companions in every way and have filled our lives with great joy, but did you know that what your dog feels when he sees you is very much like what you feel for him?

What your dog feels when he sees you

“Dogs are man’s best friend.” This simple phrase has penetrated our subconscious in a supernatural way. However, despite being such a common phrase, it contains within itself thousands of years of history. If dogs could think and talk, would they say the same about us?

65 million years ago, after the extinction of the dinosaurs, there was a great change in the world that directly affected both dogs and humans. Mammals began to feel much safer in the world since most of their predators had died.

For millennia, mammals have spread all over the planet. Now you may ask, when did the first direct ancestors of dogs appear? Well, according to paleontological data, 37 million years ago the first canine race, Cynodictis, existed.

This early ancestor of dogs lived for almost 10 million years until it completely disappeared and gave way to new generations closer to modern times.

One of the canine species that exists today that is the closest ancestor to the dog is none other than the wolf. This canine race first appeared in Germany and America 200 thousand years ago, along with the fox, the jackal and the coyote.

But something happened: wolves began to adapt to the human species. Maybe you thought that dogs had existed as we know them since the beginning of the world, but even wolves haven’t. For 40 thousand years, humans have had a very close relationship with a very small number of dog breeds like the ones we see today.

Our initial relationship with dogs happened, according to genetic studies, over 32 thousand years ago. But it was not a very kind relationship. Rather, it was the opposite: extremely hostile.

The problem was mainly that the first dogs had inherited wild genes from their ancestors the wolves. Over the centuries, however, they changed their attitude towards humans.

The first sign of reconciliation between dogs and humans was their gradual and voluntary submission to get favors from us humans, such as food, shelter, protection against predators, among many other things.

It was 19 thousand years ago when dogs and humans began to work together. The domestication of dogs began with simple jobs such as hunting or herding sheep. But your relationship with your dog may not look like this interdependence between the species.

For many years, dogs were considered to be property. We didn’t consider them creatures that feel and suffer as much — or more — than us. However, now there are laws in several countries in which a dog can be a legal part of a family as a living and independent being.

What your dog feels when he sees you

Today, dogs have become our inseparable companions. Both they and we feel a lot for each other. However, unfortunately we are the only ones able to communicate it with words.

Our dogs, although they have a lot of emotions inside, communicate them in another way. Through expressions and actions, dogs have the ability to demonstrate love and affection. They may even consider us to be an inseparable part of their lives.

Maybe you think that what your dog feels when he sees you is only because you are his provider of food and protection. But today’s dogs have an evolutionary difference with respect to their ancestors. They love the company of human beings.

There is evidence that upon seeing us, our dogs get just as excited as a baby seeing his mother for the first time. And it’s no wonder: we consider our pets to be our “fur children.”

When you get home after awhile, your dog will jump excitedly and even want to lick your face. While it’s a symptom of loneliness and anxiety, it also shows he’s very happy to have you back.

The action of licking your face is also inherited from wolves. It’s a way to greet and show affection to the members of his pack. You will also notice that when you’re home he’ll want to follow you everywhere. Perhaps he likes to lie on your feet.

Hopefully now you understand a little better what your dog feels. When he sees you, your dog feels emotions that he cannot express verbally, so pay attention to what his actions are saying.

Interesting Articles
Cats
What's the Origin of the Persian Cat?