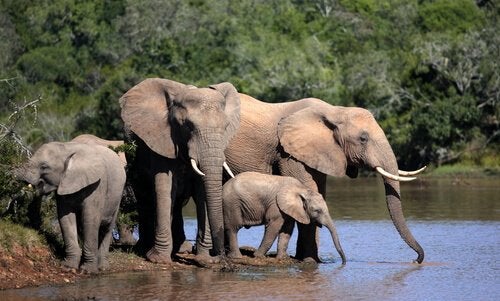 Sometimes people decide not to get a pet because of space issues at home. But some stories, like that of baby elephant Moyo, shows us that anything is possible. Her story is going viral all over the world.

Moyo was a baby elephant who was found almost dead. She was crossing a river with her herd when the current dragged her away, separating her from her family.

But fortunately an organization called Wild is Life came to her rescue. The founder, Roxy Danckwerts, adopted her and became her new mother. Now Moyo joins her in all of her chores, helping any way she can.

The logical assumption in this case is that Moyo’s growth is going to make everything very difficult. When the elephant was a baby she would follow her owner throughout the sanctuary, but more than a year later, things are changing. Moyo, for better or for worse, still wants to follow her owner around everywhere, but she’s growing very fast and her size will make it hard.

Coexistence is making things chaotic at home: she’s breaking things and creating situations that would test anyone’s patience, but the mutual love between the elephant and her owner is strong.

Moyo weighed more than 220 pounds at birth. We’ve all seen movies where wild animals adapt to domestic life. But Moyo will have to live in a more appropriate space as time goes on. While they can, they’re both enjoying a love that goes beyond any difference in species.

Caring for a baby elephant

Elephants need proper attention by personnel specialized in day-to-day matters such as food, skin care and their enormous water intake requirements, up to 200 liter per day, with an extra supply of additional water if the temperatures are high.

As far as tolerating the heat, African elephants have more tolerance than Asian elephants, one reason being that their habitat has accustomed them to handle high temperatures better.

Elephant skin requires daily care, including their ears, around the tusks, the hind legs, the stomach and the skin around their eyes. The dead skin on the back must be removed, as it can take a long time for them to detach it on its own. After a bath, an elephant should dry off as soon as possible so they don’t get cold.

Feeding a baby elephant as she grows

To feed an elephant calf, it’s best to use a large bottle that contains a mix of skim milk and coconut oil. Although at the beginning, feedings should be every three hours, they will go down to three times per day, plus vegetation each time. An elephant needs milk for three years and coconut oil for five years.

Baby elephants require a lot of attention, contact and affection. They need interaction all the time, lots of water, and physical games, like wrestling.

At night a baby elephant likes sleeping with a large scratchy blanket on top of her to simulate her mother, and sleeping with others up to the age of two.

Also, socialization is important — being together with other members of their species to communicate with each other. Wild herds usually accept orphaned elephants very well since they are very sociable animals.

Exotic Pets
The Iguana's Diet and Its Importance to its Health

Exotic Pets
The Care of Triops and Keys for Their Development

Triops are a genus of animals belonging to the class Branchiopoda. We're talking about some really prehistoric beings. In fact,…