The Care of Triops and Keys for Their Development

Triops are undemanding animals. However, they have certain specific requirements that must be taken into account. 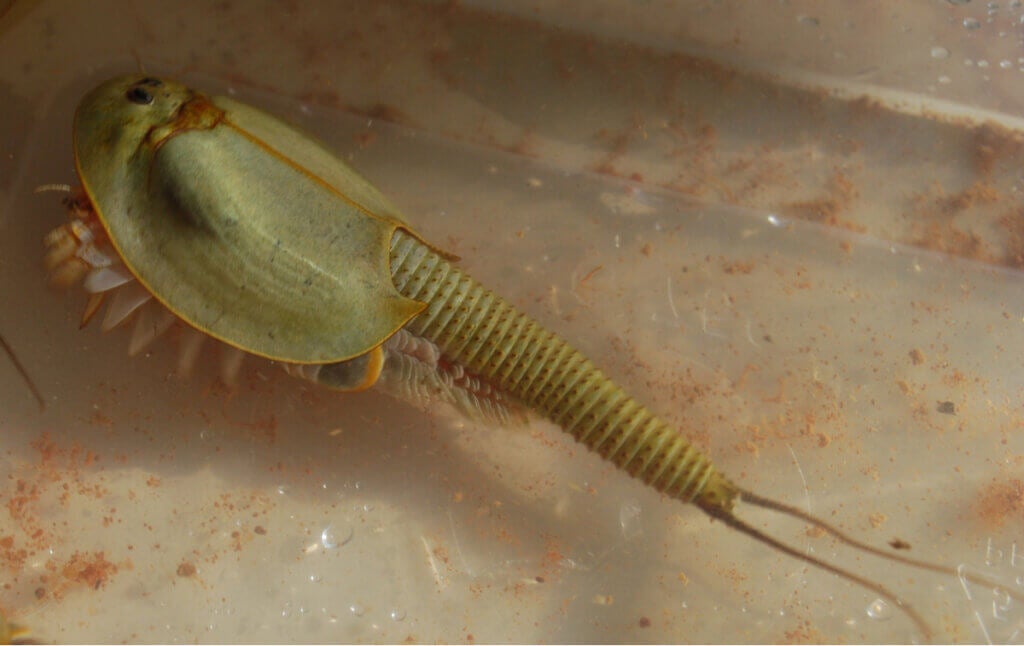 Triops are a genus of animals belonging to the class Branchiopoda. We’re talking about some really prehistoric beings. In fact, they appeared in the Triassic period – about 220 million years ago – and have managed to reach our present times. The care of triops is relatively simple, but if you want them to survive over time, you’ll need some advice.

Historically, people bought triops as eggs, which hatched in a small tank and, after one or two months, all the animals would die. Although it’s true that the life cycle of a triop is short, you can create a triop aquarium that lasts much longer if you follow the guidelines below.

Currently, there are seven different species of triops and all of them make suitable pets. However, when you buy your triop eggs you must make sure that they come from captive breeding and haven’t been removed from their natural environment. Some species of triops are threatened, such as Triops australiensis.

Triops are always bred from eggs, which must be bought in specialized stores or retailers through the internet. They’re usually sold as kits that include about 20 eggs, triops food, and breeding instructions.

Other kits also come with a fish tank and various accessories. Unfortunately, in many cases the items that come with these animals leave a lot to be desired. Therefore, it’s best to create your own triop aquarium, which you can naturalize and even get your pets to lay eggs.

Care of triops in an aquarium

Triops are very grateful pets, because with just minimal care you’ll get a shiny aquarium. In addition, the breeding of these animals allows you to observe their entire life cycle, from eggs to adults.

Their life expectancy is short, no more than four months in species that reach a larger size. Individuals of Triops cancriformis can reach a length of about 4 inches and, before dying, will leave as many offspring as possible. Below, we’ll show you how to set up a triops aquarium and what the care of triops entails.

The triop aquarium and decoration

Some tutors choose to keep their triops in a standard tank without any decoration, substrate, or control of water variables. This is fine if the idea is to only see the life cycle of the animal once. But if you want to keep them as pets for a while and keep them healthy, you’ll need more gadgets.

The tank should have a minimum capacity of four liters, because, when the triops reach adulthood, the optimal population density is one triops for each liter of water. The water can be from the tap, but it must be previously treated to eliminate chlorine and chloramines, as they’re toxic for these animals.

The ideal substrate for triops is coarse sand. This is where they’ll place their eggs when they arrive at the adult phase, something that happens before they’re one month old. This substrate should have a depth of about 1 1/4 inches.

At the same time, you can place natural plants and rocks inside the aquarium. Just be sure to acquire them from specialized establishments so that the animals don’t become intoxicated. None of these decorative objects are essential, but they’ll give the tank a nice look.

As we’ll see later, triop eggs hatch in distilled water. However, after 10 days they must change to a more mineralized type of water. This will produce changes in the characteristics of their environment, which must be controlled.

Physicochemical factors of the aquarium

Keeping the triops in the tank requires a constant temperature of about 25ºC, because, if this value changes too much, the triops will die. Therefore, make sure you have a water heater and a thermometer to control it.

Another crucial factor for the care and development of the triops in the aquarium is the pH. This will change according to the species living in it. Some species of triops only live in very alkaline water, while others prefer an acidic environment. However, the optimal pH range is usually between seven and nine.

Finally, there are two elements that can never be lacking in triops water: oxygen and calcium. For animals to develop properly, the water must be well oxygenated. Using bubblers is a good way to achieve this.

With respect to calcium, these animals require it to carry out their successive molts. Therefore, it’s best to use calcium tablets on a regular basis – you can purchase these in aquatics stores.

Finally, it’s important to place a filter in the aquarium, as this will prevent ammonia and other toxic substances from accumulating in the water due to the animals’ digestive activity.

Care of triops during hatching

Triop eggs shouldn’t hatch directly in the tank where they’ll spend the rest of their lives. Ideally, you should plan the hatching in a plate about two centimeters deep and always with distilled water.

Before adding the eggs to the water, you should make sure that it’s at 25ºC. Furthermore, before adding it to the dish, you should shake it so that it’s oxygenated. After that, simply add about 20 eggs and in 24 hours they will have hatched.

Usually, triop kits provide food for the first stages of development. You’ll need to follow the instructions, but it’s best not to overfeed the larvae, as algae and bacteria could grow in the dish and kill the pets.

When the triops are adults, they’ll eat almost anything. For this reason, you can use the typical flake fish food or even live food – like daphnia – as the base food.

After eight to ten days, you can place the triops in the final tank, where they’ll live for the rest of their life cycle. This should be done gradually to avoid a shock. It’s best to add water from the tank to the dish very gradually and mix it. In addition, both must be at the same temperature.

Care of triops during reproduction

As we’ve said on several occasions, triops have a short but very full life. If you want your tank to hold triops for longer than their normal life cycle, you’ll need to hatch eggs every few months.

As soon as the females deposit their eggs, you can extract them from the substrate. In order for the eggs to hatch, they must go through a drying period. Therefore, you should let them dry completely before starting the next generation’s hatching again.


Having triops as pets is very simple. However, you mustn’t forget that they’re living beings and, although they’re seen as good pets for children, they certainly have demanding requirements. Infants can enjoy watching these animals grow and develop, but it must be the adults that look after them.
Saltwater or Freshwater for Your Fish Tank?
Fishkeeping is a complex practice: One of the most important factors to consider is choosing the type of water for your fish tank. Learn more up next! Read more »
Link copied!
Interesting Articles
Exotic Pets
The Iguana's Diet and Its Importance to its Health

A parrot diet is one of the few things you can control to keep yours healthy. However, you must really…