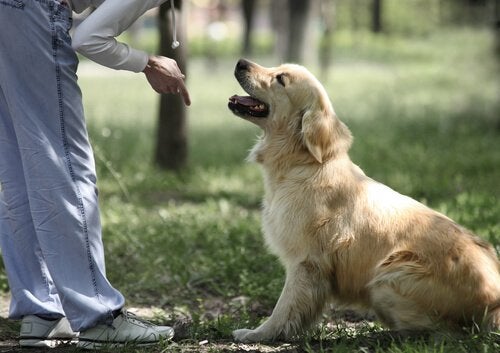 Educating and training your dog is a matter of top importance, since it could later cause problems if you don’t do it correctly. Therefore, in this article, we want to share the six dog training mistakes that people make, as well as how to avoid them.

Asking for help from a pseudo-expert

The first time you bring an animal into the home, and particularly if it’s your first pet, you might get into a bit of a panic and go running to anyone who seems to know more than you about animals. This might be a friend who’s read some books on the subject, or even your neighbour on the fifth floor who’s always had a dog and says that he knows everything about it.

Forget this. The best thing is to go to a vet. They’ll tell you how healthy your dog is and advise you on dog training mistakes, as well as recommend professional trainers.

Overwhelming your dog with words and cuddles

One of the most common dog training mistakes people make with a puppy is that as soon as they get it home they treat it like a baby. They overwhelm it with cuddles, stroking, and baby talk.

It’s best that you let them discover their new environment. The house is new for them, and there are countless places to sniff around, new smells, new tastes, and other people! Everything is new for them, so let them explore.

Starting to train them late

You need to let you dog get used to the house, their surroundings, and the family, but don’t delay their education! Some people believe that they don’t learn anything in the first sixth months, but in reality, they start to learn from the first minute and never stop. Not starting their training early on is a big mistake and patience are consistency are key for doing it correctly.

Popular wisdom is sometimes right: “you catch more flies with honey than vinegar.” Punishing your dog is not going to make them learn better and is one of the biggest dog training mistakes. It’ll be much less effective than positive reinforcement and may even cause fear and detachment.

Instead of hitting your dog with a rolled-up newspaper when they do their business in the house, give them a treat when they do it outside. You’ll achieve a lot more this way.

It’s a common belief that dogs “play by biting”, since they have teeth and they use them in play, just like their legs and tail. However, a very common mistake is not correcting their biting, and allowing them to grow into an adult without this being addressed.

This is one of the few cases in which punishment makes sense. However, you should never hit your animal or shout at them, or in other words, abuse them.

If they bite during play (which is the most common) you need to stop playing and show pain. For example, when puppies play, and one bites the other more than they should, the bitten one will emit a whimper and stop playing.

Being too harsh or too lenient

We all know that getting a balance right can be quite difficult, and many animal owners can be either too permissive or too strict. Therefore, try not to think of your pet as a subject, nor give in to them too easily. As Aristotle said, “Virtue is the Golden Mean between two extremes.” We hope you’ve found this article on dog training mistakes useful.