Advice for Having Two Male Dogs

Along with being peaceful, both dogs need to feel like they have a pack leader, which should be the owner. You have to follow the normal rules for socializing them, but the new dog also has to respect the old dog's place. 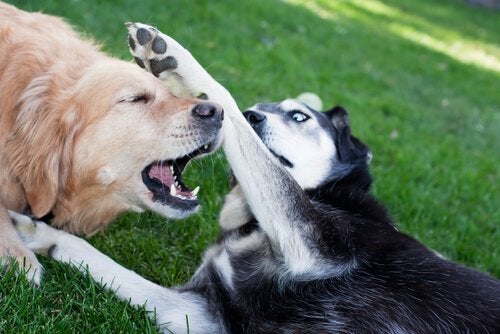 Having a pet is one of the greatest gifts in life. It doesn’t matter if it’s a dog, cat, bird, or any other species. However, having two pets of the same sex can be a little complicated at times, especially if you have two male dogs. Usually two male dogs have conflicts about who takes the leadership role.

A question of hierarchy

Dogs can live alone as long as they have a human with them, but there’s nothing more dangerous than having an entire pack of dogs because they can communicate even better than wolves.

You need to be a firm pack leader, and your dog should be a faithful follower. Of course it doesn’t take long for most of us to fall under their affectionate spell, and a lot of people decide to add a second member to their family.

Before bringing this new member into the house, you should figure out if your other dog is capable of living under the same roof with him. It’s usually best to find a dog of the opposite sex, but how do you do it if they’re the same? Continue reading to get some advice.

How to introduce one male to another

There are specific rules to follow when bringing a new dog into your pack. These rules help prevent things from getting out of hand. First, remember that you’re the leader. Second, remember to respect the first dog’s place.

It’s a good idea to have them meet for the first time in a park or an open area. It should be somewhere they feel free, not trapped with each other. Never hold the new dog in your arms when you introduce him because that could cause a major conflict.

It’s best to let the two dogs be and get to know each other. Just watch over them to make sure they don’t fight. Their first encounter should be short. Then you can take them on a separate walk and have them meet at home afterwards.

If you bring in a new dog out of nowhere, your dog’s first impression maybe that the other dog is invading his territory. If your dog feels that way, he might end up fighting with the other dog and you’ll get a lot of headaches out of this. As the pack-leader, you must take necessary action to make sure that doesn’t happen.

If you follow this advice, your male dogs can become best friends! It’s all just a matter of time and patience. If things aren’t going as well as you’d like, you can see a veterinarian or dog psychologist.

What you shouldn’t do

As mentioned before, you shouldn’t change the pack hierarchy. Here are some other things to avoid if you want their relationship to be successful: