All About Search and Rescue Dogs

When these dogs go through training, positive reinforcement is used to teach them to associate finding someone or something with receiving a treat. 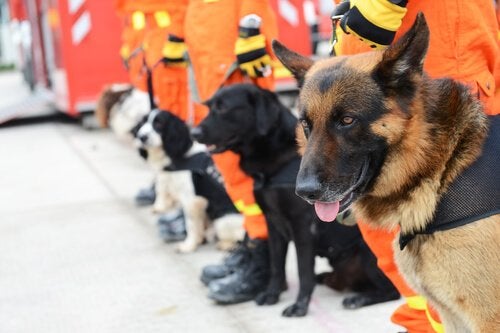 The Swiss were the pioneers of search and rescue dog training. The reason why they started training them was due to a good number of people disappearing in the Swiss Alps. In this article, you can learn everything to know about these magnificent animals.

The History of Search and Rescue Dogs

Even though hunting dogs have always been used for search and rescue missions, it was until World War II when these dogs became recognized for their abilities.

Breeds such as the German Shepherd were used to search for survivors that were trapped under rubble. Soon afterward, training search and rescue dogs started to become more common, in order to use them for future catastrophes and disappearances.

As early as the 1950’s, after overcoming Europe’s most difficult time in history during the post-war, several schools specialized in training search and rescue dogs started appearing. This profession became especially popular in Switzerland and Germany.

During the 80’s, the first Spanish training schools opened and they were based on the method developed by the Red Cross of Hamburg. The training plan consisted of four phases:

How does the dog search?

Some people believe that these dogs “hunt” for clues by sniffing an object belonging to the lost person and following that person’s scent until they find the missing person. However, that’s not possible when the identity of the person is unknown, or there isn’t any object to trace his/her scent with.

In their training, trainers teach the dogs to differentiate between the scents of people nearby, the scents the dog can see, and those the dog can smell but can’t see. This comes in handy in case a person is trapped under rubble, or hidden away.

When the dog detects the person or an object — whether it being drugs or explosives — he will bark. This happens because, during the training sessions, positive reinforcement is used on the dog so he associates the act of finding the hidden object with receiving a treat.

What dog breeds are best suited for search and rescue missions?

The answer to this question is simple: whatever dog that has been trained for it. Sometimes people think that only German Shepherds or Bloodhounds can be search and rescue dogs. However, there are hundreds of examples of other breeds that can do the same job just as well.

So if the breed doesn’t determine search and rescue abilities, then what does? Here are some traits that are necessary for this kind of life-saving work.