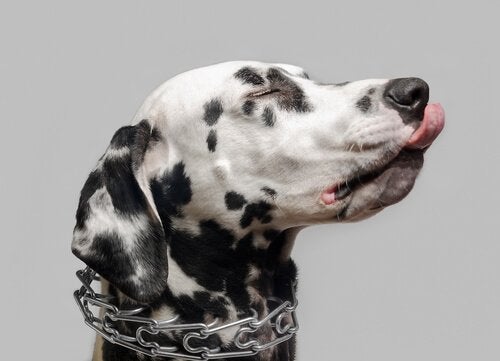 For a long time, choke or shock collars have been seen as effective tools for correcting dog behavior. However, over time we have seen that dogs who are corrected with aversive collars don’t get any better. Instead, they develop new behavioral problems.

What are aversive collars?

Aversive collars are kinds of training collars. These collars are devices that are put around the dog’s neck and causes an uncomfortable feeling when they misbehave.

Electric collars, vibrate or electrocute the dog when the owner pushes a button from a distance. Or, they might only activate when your dog’s throat vibrates when they’re barking.

Pinch collars use metal or plastic spikes that poke your dog’s neck when they pull on the leash. These collars also do this if you tug on the leash to correct your dog’s behavior. Choke collars, on the other hand, are mobile collars that can be continuously tightened around your dog’s neck.

These collars have been used to train dogs for years. For a time, it was thought that they were effective and the dogs that were trained with aversive collars learned to behave better. However, it’s been shown that not only are these collars non-effective, but they also cause new problems.

In reality, there are still a lot of dog trainers who use these kinds of collars. However, they are illegal in several places. This includes a lot of European countries and other places in the world. In the US, these laws are enforced throughout certain states.

Why use aversive collars on dogs

There are many reasons for a dog owner might have to use an aversive collar on their dog. Normally, this is the result of bad advice coming from someone who isn’t a professional dog trainer, such as a neighbor who has large dogs. It could also come from a veterinarian who sees an opportunity to sell a new collar.

In general, dog owners who use aversive collars use them to correct a behavioral problem of their dog. For example, leash pulling, aggressiveness, or being too energetic in the street.

However, aversive collars are not a solution for behavioral issues. In the best cases, they hide the initial problem. In other words, the dog learns to behave so they don’t get the unpleasant stimuli, like a shock or spikes jabbing into their neck.

This doesn’t solve the behavior problem, it only hides it. The day the owner takes the training collar off or increases the dog’s pain, that’s the day the behavior will reappear. In order to correct a behavior issue, you need to get to the root of the problem. And, a collar will never be the solution.

Behavioral problems that appear when you use them

Training collars aren’t just a solution when a dog misbehaves, instead, they make them worse or cause new issues.

Many times, a dog’s bad behavior indicates that there’s a problem in the dog’s day to day life. For instance, they could experience stress, fear, or pain. As an example, it’s normal for dogs who bark a lot to have high stress. In these cases, a bark control collar doesn’t fix the problem. It just covers the barking. Therefore, the problem causing there barking still remains.

Covering the symptoms of a large problem isn’t a solution, it’s a temporary bandage. If the dog is upset and you don’t correct the problem, the symptoms will end up appearing in other forms. For instance, instead of barking they might destroy things around the house.

Also, subjecting your dog to unpleasant situations on a constant basis can cause behavior issues that they didn’t have before. This falls in line with behavior laws and Pavlov’s classical conditioning.

For instance, an owner might put a pinch collar on their dog so that they stop pulling on the leash. However, the dog feels pain or is uncomfortable when they’re in the street. Likewise, when a bicyclist approaches, when another dog comes up to say “hi”, when there’s a noise and they get startled, etc.

In the dog’s head, they start to inconsistently relate each of these situations with the pain they feel. Soon, they’ll think that each time another unknown dog approaches, they’ll feel pain. They’ll do whatever they can to stay away from the dog so that their collar doesn’t get tightened.

Through this basic learning mechanism, dogs will start to be aggressive toward other dogs, children, bicyclists, the garbage truck, etc… It’s impossible to know what links their brain will make.

Fear and stress are common emotions in dogs with aversive collars. These two emotions cause almost all of the behavior issues that owners don’t want: aggressiveness, excessive barking, leash pulling, inability to behave well around other dogs, destroying things around the house, etc.

Luckily, animal psychology and canine training have evolved over the last few decades. Properly educated trainers and families that want to teach their dogs already use a lot of other methods and tools to correct their dog’s behavioral problems. Also, they don’t need to resort to using fear or pain.

The only truly effective way to correct a dog’s behavioral problems is to get to the root of the problem. This way you’re not using temporary bandages and the correction will be long-lasting.

Veterinary studies have discovered that dogs who use aversive collars feel 55% more stress than other dogs. These kinds of training collars cause fear. And, with this, many other kinds of behavior problems appear.