How to properly stop a dog fight 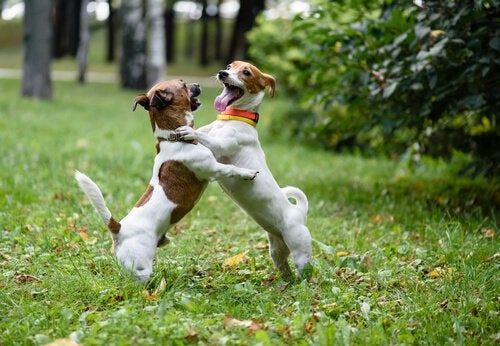 When we see two animals fighting, we immediately want to separate them however we can. However, this can end badly, as much for them as for us. That’s why today we’ll tell you how to properly stop a dog fight.

Tips for stopping a dog fight

First of all, it would be good to know how to prevent a fight between dogs. Watch how the dogs are interacting with each other. If they are getting worked up, if they growl or bare their teeth, or if instead of playing they attack the neck, then pull on your dog’s leash to get him away from the area.

Many times, playing goes from fun to rough. Other times two males face off with each other to show their leadership. There are also fights over food, over a female or over puppies. People want to help by separating them but sometimes we end up getting hurt. Check out the following recommendations to stop a dog fight:

This is fundamental because nerves do not allow you to think or act correctly while a dog fight is happening. Most clashes between two dogs only last a few seconds. Therefore resist the temptation to grab their collar. Instinctively, the animal could turn and bite you. So, it is better to breathe deeply and count to 10 before intervening.

A good technique for separating two dogs that are fighting is to scare them. Then they will pay attention to something else and stop biting or growling. You can give a shout, clap, or stomp on the ground.

3. Throw water on them

The water catches the dogs’ attention, and also many of them do not like being wet very much. You can use a hose or whatever drink you have on hand. (If you go to the park, for example, always bring a bottle of water with you, especially if your dog tends to fight.) A “bath” will not hurt them and will keep them from fighting.

Find something around you that can help you separate them such as a piece of wood, a large piece of cardboard, a long stick or the lid of a trash can. Anything that serves as a shield for your arm (so they will not bite you) and that keeps them separated from each other at the same time.

5. Throw a blanket over them

If one of the dogs cannot see his opponent, he will stop fighting. In addition, the other will avoid attacking because he does not understand what is happening. You can use a blanket, a coat or any other material.

The dog that is covered will focus his energy on getting rid of the fabric on top of him. Meanwhile the other will be distracted and more open to being removed by his owner and taken away.

Be very careful with this action because it is possible the dog will try to bite you out of instinct. The good thing is that it’s an effective technique to stop a fight. Pull the tail back and upwards hard but not enough to hurt him. Remember that there are bones and nerves in the tail that are connected to his spinal cord.

There’s no need to kick the dog hard to extract him from the fight. Just use your leg to push him away with some force in order to stop the confrontation. This technique is only a good idea if you’re wearing thick pants and footwear, since the leg would probably be the target of any attempt to bite.

8. Last resort: Use your arms

If none of the above works or you do not have on hand any of the objects that can be used to separate the dogs, then use your arms. Lift the back legs of the dog as if he were a wheelbarrow and move him away as fast as you can. Once you have successfully separated the dogs, keep them at a good distance for a while.