Do Dogs Get Jealous?

Dogs make it clear through their behavior that they don’t like to feel they’re not getting their fair share of attention from their owners. This could take due to a new pet in the family, or even an object their owner gives more attention to. 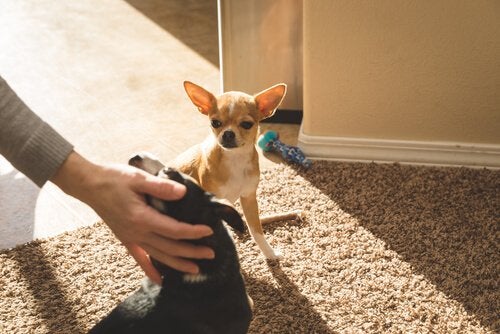 The debate about whether dogs can feel and express emotions in the same way as humans have been going on for years. People have many contradicting opinions about this topic, but there are studies that show they really can. One of the most recent was specifically about whether dogs get jealous.

The study about jealousy in dogs

It’s fascinating to see how they do these studies about dogs, and their results are even more amazing. And this is what took place in this study.

In Austria, researchers studied a pair of dogs that are owned by the same person. They had both dogs give them their paw but treated them very differently. They praised one and give him a treat for doing a good job, but nothing was said to the other one.

When the dog with realizes he didn’t receive a treat for his actions, he showed feelings of anger and bitterness. Afterward, the dog refused to give his paw to his owners when asked to.

“One crucial element for this change of cooperation may be due to the sensitivity towards the others’ efforts in comparison to his own effort and earnings. Inequity aversion is thought to be the driving force behind unselfish motivated punishment in humans that creates a powerful device for the enforcement of cooperation,” says Dr. Range, one of the lead researchers, in the journal PNAS.

The only other animal that has shown these reactions were primates. However, now it’s clear that dogs have them too. Man’s best friend gives humans everything in exchange for so little and just want a bit of fairness in return—it’s ironic, isn’t it?

Another study showing that dogs get jealous

As you can see, this article isn’t based on only one study, there are many others that support this standpoint. Researchers in California recorded videos of 36 dogs in their homes while their owners paid more attention to other objects.

These other objects were an interactive stuffed animal that barked, a cube, and a book. They had to treat the first two like a pet — petting it and talking to it — and read the book out loud. The dogs’ reactions were similar every time.

They would bite these objects, get in between the objects and their owners, or even take them and hide them to get them out of their territory. According to one of the researchers, this was the conclusion of the study:

“Our study suggests not only that dogs do engage in what appear to be jealous behaviors but also they were seeking to break up the connection between the owner and a seeming rival. We can’t really speak to the dogs’ subjective experiences, of course, but it looks as though they were motivated to protect an significant social relationship.”

What do dogs get jealous over?

In the second study, the dogs worked harder to separate their owners from the stuffed animals than the other objects.

So, dogs can get jealous of anything that they feel threatens their deep bond with their owner. Why is this worth knowing? Well, it’s important to understand every member of your family, whether they’re human or animal.

Always be sure to give your dog the attention he needs, and never forget to keep up with his routines and basic care. Of course, you should also help him protect his territory. If the newest member of your family is a pet, give him his own spaces and his own bowl and bed.

After reading this article, could anyone really keep on denying the fact that dogs have emotions?.