Home » Animals » What to Do if Your Dog is Becoming Aggressive

What to Do if Your Dog is Becoming Aggressive

Aggression in dogs can have different causes, as well as different treatments, even if it is necessary to count on the help of a specialist-- educator or canine trainer-- to prevent greater problems 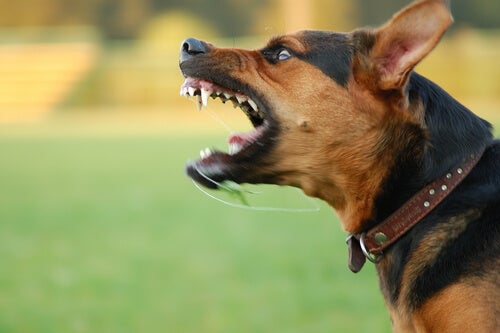 Dogs are adorable pets that have won the reputation of “man’s best friend.” Throughout human history they have been adapting their behavior until becoming not only useful, but also friendly. Therefore, it is usually worrying when a dog becomes aggressive.

In this article, we are going to have a look at some ideas to address this issue:

Is your dog becoming aggressive?

When you feel that a dog is becoming aggressive, the first thing you must do is stay calm. You need to figure out the cause, but overall, don’t make the situation worse with stress or anguish.

Aggressive behavior is a recurring issue that could happen to any type of dog. This does not have anything to do with a specific breed, and it is not related to the gender of the dog either.

Having clarified that point, all of the owner’s concerns about possible aggressive dog behavior are reasonable. However, it must be said that most of these aggression problems have a solution.

What do you do if your dog is becoming aggressive?

Go to the veterinarian

The veterinarian is the first person that you should see in these cases. This way, you will be able to rule out that the aggression is due to some health-related issue.

For example, a dog can get aggressive because of some encephalic anomaly. A case of epilepsy or some type of hormonal unbalance also could influence his aggression.

The percentage of cases of aggressive dog behavior is not very low. It is calculated that around 20% of consulted cases are due to some physical illness, and the pain could be unsettling the pet. This is common in human beings as well; it is just that dogs do not have a way of channeling it because unlike people, they lack the ability of reason.

Defining the particular case of aggression

With the help of a veterinarian, once any type of health problem has been ruled out, it is time to move on to the next step. One must pay attention to the type of aggression that the dog has. Does he bite strangers? Or does he do it when they take something interesting away from him? The answer to each one of these questions will need a different approach and treatment.

Dogs and wolves: their similarities

It must not be forgotten that, to a small or large extent, there is an intrinsic aggression in all dogs. Dogs and wolves have a common origin and they are animals that live in groups. When this animal community develops, a macho alpha has to prevail: the leader of the pack. That is achieved by imposing on the rest of the group members.

The aggression that a dog uses to connect with his pack is part of his way of organization. The problem arises when a dog is brought to a house, no doubt about it.

It is instinctive for a dog to assume that all of the other people in that house belong to his pack. Therefore, it is not strange that he would want to treat the people as he would treat his canine community. For that reason, it is very important that a hierarchy is established at home from the very start.

It still needs to be established whether a dog is becoming aggressive because of a fearful or threatening situation, or because he is disputing his space. Once this has been determined, everything else will be less complicated.

When a dog is afraid, there is no need to apply a technique that involves punishment. In this case it would be like fighting fire with gasoline; feeling scared must be counteracted by establishing trust in the animal. Therefore, it is much better to train by using games.

If he is afraid of other people, you need to create spaces of progressive conditioning for short periods of time. The dog should feel comfortable and not threatened, otherwise the threats will make him more aggressive.

When a dog responds aggressively, it’s because it has worked before and he has no other response. For this to change, you must have an alternative option for the dog; something that could seem attractive to him and that fulfills our desires instead of his aggression.

It is always important that you notice any symptom of unwarranted aggression in a dog and take precautions. It is of paramount importance that the animal is watched and not around children.

There are minimal precautions that can prevent accidents. It’s a good idea to take him to a specialist, treat him with authority and love, and put a leash and muzzle (the latter only when it’s necessary) on him when going out.