Despite their intelligence, this breed needs an owner who can take on the leadership role, socialization with other dogs, firmness, and positive reinforcement. All of these aspects will help prevent aggressive or destructive behaviour. 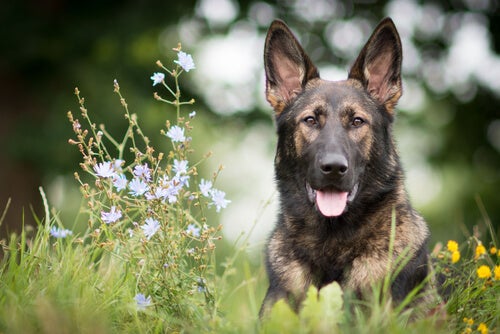 The German Shepherd is one of the most sought-after dogs for a pet. Their personality, intelligence, and learning ability make them really easy to care for and to train. Are you thinking about adopting one? If so, read this article find out all you need to know about training a German Shepherd.

Advice for Training a German Shepherd

Although German Shepherds are noble creatures and easy to train, their size and strength mean that they need to be trained at an early stage of life so won’t try to take on the role as the alpha dog.

This is one of the most fundamental steps in training any dog. As before on several articles, dogs need to follow a leader. However, if they feel they don’t have one, they will take that role themselves and put their owner beneath them.

With a balance of firmness and affection, you need to make them see what their role is in the family. They don’t need to just see you as the leader, but also accept that other members of the family are superior to them and they should obey them as well.

To achieve this, all household members need to follow the rules you set for the dog, otherwise, he could get confused. One way to get a dog to accept his role as a pet is to not let him pass through the doorway ahead of you. He should eat after you have eaten, he should have their own place to lie down and rest, and he should go outside at specific times of the day.

Large dogs breeds need a greater amount of exercise than others. The German Shepherd, in particular, needs to channel its energy to not get bored. If these dogs don’t get enough exercise they could start to exhibit aggressive or destructive behavior.

Likewise, exercise helps keep dogs healthy by getting their blood flowing, strengthing their muscles and joints, and keeping their bones strong.

Socializing with other dogs and people is a really important step towards having a friendly dog that gets along with other people and animals. A unique trait about this breed is how self-assured they are, which is why these dogs see themselves as superior to others and even treat them aggressively.

If at any point you see the slightest sign of aggression — such as nipping or biting — they could become antisocial and really hard to deal with.

Be Firm and Consistent

German Shepherds are very intelligent dogs, but this doesn’t mean that they can learn 10 commands at the same time and all for the same thing. Before training a German Shepherd, think very carefully about what, when, and how you want him to do something.

Don’t change your commands or routines so often or else you will confuse your dog and he won’t learn anything. Or even worse, he may become disobedient.

This breed is great for teaching orders Like “sit”, “fetch”, “let go”, “lie down”, “roll over”, “give me your paw”, or even “bring me my shoes”. However, despite being very intelligent, training German Shepherd requires time and patience. Never shout at them and definitely never hit them. The only thing you’ll manage to do is scare them.

Instead, you can reward them when they do something well and don’t only focus on the times when they don’t do something right. Positive reinforcement always works and this is no less when it comes to German Shepherds.

So, as you can see, it’s not so difficult to train a German Shepherd. If you decide to adopt one, you’ll have an incredible pet that will surprise you every day and a special companion to share your life with.

Deldalle, S., & Gaunet, F. (2014). Effects of 2 training methods on stress-related behaviors of the dog (Canis familiaris) and on the dog-owner relationship. Journal of Veterinary Behavior: Clinical Applications and Research. https://doi.org/10.1016/j.jveb.2013.11.004