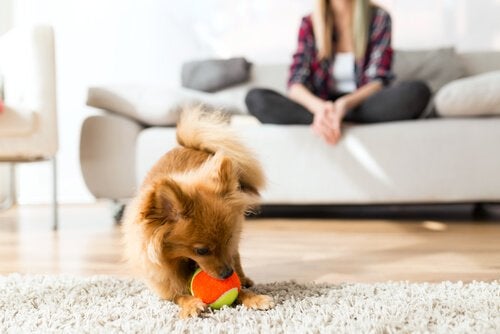 After adopting a dog, you will eventually notice that they are very different from the preconceived and mistaken idea you had about them. In order to understand your dog, you must consider some basic aspects of canine behavior.

It’s necessary to understand your dog in order to have a peaceful living space. So, continue reading to find out how to do it?

How to understand canine behavior through gestures

Unlike humans, dogs express their feelings though gestures, by telling others what they’re feeling. So, by keeping an eye on them, humans can learn a lot about a canine’s behavior.

Dogs can be afraid for many reasons that might seem ridiculous to people. Their body language makes it obvious that something is troubling them.

For example, both they will put their tail between their legs, bend their back, and close their mouth. If what’s making them afraid goes away, then they will begin to walk backwards or even run away.

Dogs are natural protectors, so they will jump at anything or someone suspicious that makes them feel wary. You can tell if a dog is angry by looking at their ears, which will be pointed forward along with an intimidating frown on its face. If they know exactly what’s making them angry, they will retaliate by barking aggressively.

If you are or were a dog owner, then you have noticed the type of attitude dogs have when they are scolded. They bow their heads, relax their bodies, and even hide. All these are signs of submission, because dogs are pack animals and need to follow a leader. When your dogs reacts this way, it’s because he completely understands that you are the one in charge.

Although animals may not think or reason, when they are scolded they understand that they did something wrong. So, your dog will ask for your forgiveness and love; he will brush up against your legs or he’ll lie down on the floor asking you to rub his belly. If you reject him, he might feel sad, although he will only go away and wait until you’re not angry anymore.

I’m the one in charge

This is a very common attitude in animals that have not been well-socialized at a young age or not have had any household rules. Dogs need a leader, someone to set down the rules. A dominant dog will have an upright posture, ears standing up and his tail raised. If your dog looks at you with this posture, remind him that you’re the one who’s in charge.

Playing is an essential part of any dog’s life. So your dog will often ask you to play with him. Your dog expresses this feeling with gestures indicating he wants your attention, wagging his tail, and jumping on top of your legs. He might do this with a toy in his mouth, which is obvious he wants to play. Don’t say no!

Dogs are usually affectionate animals that love getting their owner’s attention, so your dog will ask you often to pet him and to cuddle. He will go up to you and maybe lay his head on your legs and look at you from the corner of his eye, which means: “C’mon, pet me.” He may even press his head on your body so you pay attention to him.

As you can see, to understand the basic aspects of canine behavior only require you to be aware of your dog’s gestures.  Pay attention to your dog’s emotional needs in order to provide the proper care he needs. That way, you will have a happy dog and a wonderful living space.